Moscow gets 48 hours to close diplomatic offices in US 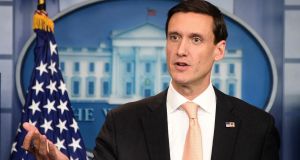 Homeland Security adviser Tom Bossert said the administration was preparing a supplemental disaster relief fund to be voted on by Congress. He said about 10,000 homes had been damaged by Storm Harvey. Photograph: Jim Watson/AFP/Getty Images

The United States has given Russia two days to close diplomatic offices in Washington, New York and San Francisco in a significant escalation of diplomatic tensions between the two countries.

The decision, taken as a retaliatory measure against Russia’s demands that the US reduce its diplomatic presence in the country from 1,200 to 455, was announced by the US state department on Thursday.

“We believe this action was unwarranted and detrimental to the overall relationship between our countries,” said US state department spokeswoman Heather Nauert, referring to the Russian decision earlier this year.

The Russian consulate in San Francisco and two trade mission offices in New York and Washington will be affected by the move.

Meanwhile, with preparations under way for Congress to sanction extra funding for flood relief next week when it reconvenes next week, the devastation caused by Storm Harvey continued to ravage the southern part of the US.

Texas and Louisiana continued to battle with heavy rainfall and flooding as a series of chemical explosions erupted at a chemical plant northeast of Houston, and 30,000 people remained in shelters in the region.

A chemical plant owned by Arkema in Crosby, about 30 miles northeast of Houston, was flooded and experienced a series of explosions in the early hours of Thursday morning, leaving 21 people hospitalised and forcing the evacuation of residents within a 1.5 mile radius.

Authorities warned that other energy plants in the region could be affected as Storm Harvey continued to move eastwards into Louisiana and Mississippi.

The price of petrol went sharply higher on Thursday as markets weighed the impact of the storm which has battered Texas, the heart of the US oil and energy industry. Almost one-third of US oil refineries have been affected by the biggest natural disaster to hit the state in 50 years.

Petrol on the wholesale markets rose to a two-year high, with higher prices expected at the pump in the coming days and weeks as the US energy infrastructure system struggles under the weight of Storm Harvey which made landfall on the southern coast almost a week ago.

In the city of Beaumont, east of Houston, the city’s water supply was cut off as much of the city remained under water. Scott Pruitt, the director of the Environmental Protection Agency (EPA) said the agency had deployed emergency response personnel to the scene. “The agency is currently reviewing data received from an aircraft that surveyed the scene early this morning. This information indicates that there are no concentrations of concern for toxic materials reported at this time,” he said.

Speaking at a press conference in the White House, Homeland Security adviser Tom Bossert said the administration was preparing a supplemental disaster relief fund to be voted on by Congress. He said about 10,000 homes had been damaged by Storm Harvey

Press secretary Sarah Huckabee Sanders said President Donald Trump had decided to donate $1 million of his personal money to help victims of the flooding. She also said the president and first lady tentatively planned to visit Texas and Louisiana on Saturday.