France and Germany have ‘obligation not to let the world slip into chaos,’ president says 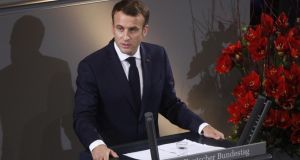 In his Bundestag debut on Sunday, French president Emmanuel Macron warned Europe – and his German host – that “chaos” looms unless the continent – pushed on by Berlin and Paris – can shatter taboos and agree further integration steps.

A week after Chancellor Angela Merkel joined him for the first World War centenary in France, the French leader was the guest of honour at Germany’s own remembrance Sunday ceremonies.

Just as the last seven decades of European peace derived from France and Germany ending their centuries of mutual suspicion, Europe’s future depended on the two nations working together to prevent Europe becoming a “plaything of great powers”. It was an ill-disguised challenge to his Berlin audience to respond to his 14-month-old European Union reform proposals.

“Europe, and within it the Franco-German couple, have an obligation not to let the world slip into chaos and to guide it on the road to peace,” said Mr Macron, the first French leader to address the German parliament since Jacques Chirac 18 years ago. That growing nationalist and populist challenge around the world put Europe at a crossroads where survival means pooling foreign, migration, environment and development policy – as well as budget, fiscal and defence resources.

“We have to overcome our taboos and overcome our habits,” he said, a nod to huge Berlin resistance on any potential financial burdens to German taxpayers, from a euro-area budget to pan-EU dole payments. His stark message for the chancellor: she who hesitates is lost.

Earlier the two leaders, joined by German president Frank-Walter Steinmeier, laid wreaths at the site of the Neue Wache memorial to victims of war and dictatorship.

Mr Macron earned a standing ovation from a Bundestag audience of politicians, religious leaders and youths for what Dr Merkel later described as an “impressive speech” on the importance of the Franco-German relationship for Europe’s future. “You said we are at a crossroads . . . and this is exactly what I perceive,” she said, insisting Europe “now has to really deliver”.

Disagreement persists on Mr Macron’s demand last week to push ahead with a European army. In the European Parliament days later Dr Merkel made a non-committal noises on backing the “vision . . . one day” of such a force.

On Monday the French and German finance ministers will unveil a proposal for a limited euro-zone investment budget, skirting ambitious Macron proposals for a larger fund to cushion national euro-zone budgets in economic downturns. The new Franco-German proposal will place the new instrument as part of the EU budget, a French concession to Germany, and may take years until ratified by all EU member states.

Berlin and Paris remain at odds on plans for a new EU digital tax, after agreeing in June it should be settled by the end of the year. After initial backing, Berlin has cooled on the idea, prompting French finance minister Bruno le Maire to warn of a “breach of confidence” if Germany “did not live up to its commitments” and back the tax.

With EU member states divided on the issue, his German counterpart Olaf Scholz has suggested Berlin and Paris would be prepared to act by themselves in 2021 if no international agreement is struck before then.

“We all agree that we need to have a clear approach for what happens if we don’t get a global deal,” he said last week.

For Mr Macron a tax on tech company profits would be one way to placate French voters furious at fuel tax hike proposals that prompted mass weekend protests.

Growing impatience in Paris at Berlin comes as Mr Macron firms up plans to shake-up next year’s European elections. His En Marche movement has allied itself with the European Parliament’s liberal grouping (ALDE) and is open to post-election co-operation with the Socialists and Greens. The aim: to block the conservative People’s Party, to which Dr Merkel’s Christian Democrat alliance (CDU/CSU) belongs, once again taking the European Commission president job.