Euphoric at 12.% of vote, Germany’s AfD will be no pushover in parliament 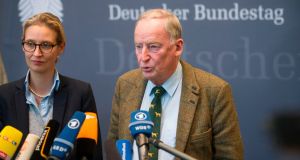 Alice Weidel and Alexander Gauland, newly elected parliamentary party leaders of the far-right Alternative for Germany (AfD), make a statement after a first meeting of the parliamentary group at the Marie-Elisabeth-Lüders-Haus parliamentary building in Berlin on September 26th, 2017. Photograph: Steffi Loos/AFP/Getty Images

The Alternative für Deutschland’s (AfD) entrance to the Bundestag was less dramatic than many of its new MPs had hoped.

Rather than march up the steps of Berlin’s Reichstag building, the first far-right parliamentarians to pass its doors since the fire of 1933, they had to make do with a concrete modernist box opposite.

Germany’s other parliamentary parties meet in the four towers of the historic Reichstag building, home to the Bundestag since 1999. But the AfD, third largest grouping in the next parliament, was instead offered a hearing room in a building named after Marie-Elizabeth Lüders.

Arriving on Tuesday in twos and threes, few if any of the AfD parliamentarians knew of Dr Lüders’s legacy: one of Germany’s first woman MPs and outspoken women’s rights pioneer, jailed by the Nazis for four months in 1937.

It’s also unlikely they know the liberal politician’s opening address for the third Bundestag, 60 years ago, quoting German philosopher Johann Gottlieb Fichte: “You should act as if the fate of German things depends alone on you and your actions.”

Nor are they familiar with the Lex Lüders legislation named after her, which addresses the rights for foreign nationals who marry a German citizen.

All in all, the building named after Lüders was an ideal place for the immigration- and Islam-critical party to begin its parliamentary work.

One of the party MPs was absent: AfD party co-leader Frauke Petry resigned on Tuesday, a day after announcing her parliamentary party departure. Her move, she said, was in protest at the extremist language in the party she herself radicalised two years ago.

She is now selling herself as a concerned conservative moderate, but none of the party’s 93 remaining MPs showed any sign on Tuesday of following her.

Though still united in euphoria after taking 12.6 per cent of the vote, the AfD will be no easy group to manage in parliament.

He also likes provocative statements, such as the claim that Germany had the “right to be proud” of its soldiers’ World War achievements. Though the party’s dominant figure, insiders say he commands the loyalty of just a third of MPs.

Another 13 are even further to the right and favour jailing children as young as 12.

A group of about 30 MPs have yet to show where their sympathies lie.

A handful of regional parliamentary MPs have left the AfD in support of Petry, including her husband Marcus Pretzell, head of the AfD in the western state of North Rhine-Westphalia. He also now claims to be a moderate, a relative term in the AfD, eight months after organising a gathering in Koblenz with French and Dutch populists Marine Le Pen and Geert Wilders.

‘A lot of movement’

On the sidelines of the AfD’s Berlin gathering on Tuesday, one prominent MP conceded: “There is a lot of movement in the party.”

A final camp of about 10 to 14 AfD moderates remain sympathetic to Petry and may later jump ship if Gauland abuses parliamentary privilege to repeat provocative remarks, such as his public questioning on Monday over whether post-war Germany was really serious about its vow to defend Israel.

If they walk out, AfD moderates can quote Marie Elizabeth Lüders’s opening Bundestag address from October 1957: “The dignity of parliament and the reputation of democracy . . . rests in the hands of each of us. Only defending one’s own dignity gives us a right to the valuable good of parliamentary immunity.”

Christmas came four months early for Saxony’s Islamophobic Pegida movement. On Monday evening in Dresden, about 1,500 people turned up for its weekly march to celebrate the AfD’s federal election success.

A week after the party and Pegida held simultaneous rallies in Dresden, marchers took to through the streets carrying posters reading “Politician Gang to the Gulags”.

The AfD finished in third place nationally with 12.6 per cent but, across eastern Germany, it was in second place, with 20 per cent on average. In Saxony, birthplace of Pegida, the party finished first with 27 per cent.

The AfD was even more popular in some constituencies. In the city of Meissen, including smaller towns such as Radebeul, Heynitz and Radeburg, the AfD polled 32.9 per cent.

Not the concrete themes have priority here but the feeling of being disadvantaged . . . and feelings about refugee politics

Alarmed political rivals in Saxony have called the AfD result a “wake-up call”. But the eastern German state has no shortage of those since unification in 1990: the election of the neo-Nazi NPD to the Saxon state parliament in 2004, replaced by the AfD in 2014 and Pegida’s weekly marches through the state capital, Dresden, every Monday night since 2015.

Radebeul mayor Bert Wendsche, a political independent, said AfD success in Saxony arose from local fury at being told their concerns about refugees and border region criminality were unfounded.

“Not the concrete themes have priority here but the feeling of being disadvantaged . . . and feelings about refugee politics,” he told the Sächsische Zeitung. “We have to learn once again to listen to the people.”

The challenge for politicians is to deal with the immigration issue, given Saxony has among the lowest concentrations of non-Germans and refugees in the country.