British government accused of ‘playing chicken’ with EU over Ireland 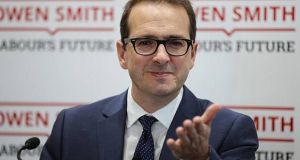 Owen Smith: ‘I would even so far as to suggest that they’re waiting for the EU to put pressure on the Irish government to say that you will police the Border on the Irish side.’ Photograph: Getty

Labour’s shadow Northern Ireland secretary has accused Theresa May’s government of playing politics with the consequences of Brexit for Ireland.

Owen Smith said the British government was “playing chicken” with the European Union over Ireland and the Border.

Mr Smith was speaking in Brighton, where Labour is holding its annual conference, at the annual Ulster Fry breakfast hosted by CHAMP, a non-profit organisation that promotes peace in Northern Ireland.

Shadow Brexit minister Jenny Chapman said it had been a mistake to demand that Britain should make sufficient progress on Ireland before the EU would move to the second phase of Brexit negotiations.

“I don’t understand how you can make progress on Ireland without having a better idea of where you’re going on the future relationship,” she said.

“I don’t think they have a solution in their back pocket for Ireland. How could they? I don’t think anyone does.

“This is going to be something where we work together towards a solution. But it’s not going to be done in Phase 1 and the EU is going to have to be reasonable about it and allow sufficient time to solve it.”

Labour leader Brendan Howlin, who is attending the conference in Brighton, said the 27 remaining EU member-states regarded it as Britain’s responsibility to come up with a solution to the problem it has created on the Border by voting for Brexit. And he warned against seeking to use Ireland as a Trojan horse to achieve a better overall trade deal with the EU.

“There is no solution to the Irish dimension of this problem outside the single market and the customs union. Transitional arrangements amount to no more than kicking the can down the road,” he said.

Mr Howlin spoke of the anger felt by people in Ireland over Brexit and the fact that its consequences for Ireland were scarcely mentioned during the referendum campaign.

“There is anger at the possibility of real issues on our island being used as pawns in a negotiating game. Anger that 50 years of working diligently towards better relationships have been so easily dismissed.

"Anger that a dynamic has been created that will have consequences we cannot yet even foresee. Bluntly, nobody knows how this is going to play out on the island of Ireland,” he said.