Macron and Le Pen engage in battle for public affection 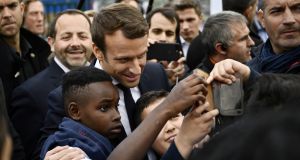 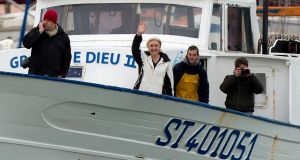 The contest between the centrist Emmanuel Macron and the far-right candidate Marine Le Pen for the French presidency has become a battle of image ahead of the May 7th election run-off, with both candidates insulting each other as they attempt to appear closer to “the people”.

Le Pen continued to set the media agenda on Thursday, as she went to sea before dawn with a group of Mediterranean fishermen.

“The Front National has the worst practices of the ancien régime,” Macron said in the address in the northern town of Arras, comparing Le Pen’s party to the French nobility before the 1789 revolution.

“Marine Le Pen was born in a château. She’s an heiress, and she claims to be from the people! She’s in a party that refuses to obey the laws of the [French] Republic.”

Macron’s supporters heaved a collective sigh of relief after his Arras speech.

French media concluded that he also won Wednesday’s “battle of the Somme”, by turning an ambush by Le Pen during his campaign stop at the Whirlpool factory in Amiens to his advantage.

Macron was criticised earlier in the week for prematurely celebrating his victory in the first round of the election on April 23rd, rather than according appropriate solemnity to the fact that the extreme-right had reached the run-off.

Votes “have to be deserved, have to be conquered”, outgoing president Francois Hollande, who supports Macron, warned him.

An Opinionway-Orpi poll published on Thursday showed he would win 59 per cent of the vote on May 7th, compared with 41 per cent for Le Pen.

As well as her trip with the fishermen in the port of Grau-du-Roi, she also attended the wholesale food market at Rungis, south of Paris, on Tuesday.

During her Grau-du-Roi stop, she stood in a white anorak on the bridge of a trawler, remarking on the “invigorating” early morning air.

“I hear Mr Macron say he doesn’t like the term ‘hardship’ at work,” Le Pen said, referring to social regulations that permit early retirement and other benefits for those who work in difficult conditions.

She also called Macron a “young trader” and said: “He wants to enact ultra-liberal policies. He wants to break social policy by decrees, without even having it debated in the National Assembly. ”

Macron used Twitter to wish Le Pen a “good trip”, noting that her plan to leave Europe would hurt the fishermen.

Le Pen was to visit Nice on Thursday night to speak to old-age pensioners, who number 15 million in France, about security, immigration and terrorism.

She struggles to command support among the elderly, but the right and far-right command close to 50 per cent of the vote in the Provence-Alpes-Côte d’Azur region. Le Pen surpassed Mr Macron by 10 points in the territory in the first-round vote.

The event was risky for Macron, whom Le Pen accuses of being an “immigrationist”. Speaking during his visit, Macron said: “France is not what Madame Le Pen says. France is not hatred of the other.

“There are all religions, all colours, people from every country of the world here.” French history was about “embracing the world”, he added, calling Le Pen “the fruit of our collective inability to solve problems”.