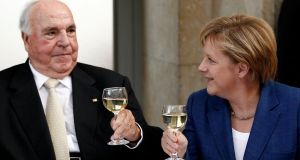 Helmut Kohl’s ex-ghostwriter has been ordered to pay the former German chancellor €1 million in damages for using recorded controversial conversations without his permission in an unauthorised memoir.

Judges in Cologne ruled that the author, Heribert Schwan, and the publisher of the book Legacy: The Kohl Protocols had infringed the personal rights of the former politician, viewed as the father of German unification.

“This is the highest sum ever awarded by a German court in a right to privacy case,” said the court in a statement.

Dr Kohl worked for several years with Mr Schwan, a journalist, who recorded over 600 hours of conversations. After several volumes of memoirs the men fell out but, rather than returning the tapes as Dr Kohl demanded, the journalist used the recordings for a 2014 bestseller.

In the recordings, Dr Kohl complained that Angela Merkel, his protégée turned rival, was so inexperienced when he plucked her from obscurity in 1990 that, at state dinners, she “couldn’t eat properly with a knife and fork”.

“At state dinners she mooched around so much that, more than once, I had to tell her to pull herself together,” he reportedly said of the later chancellor.

In the book Dr Kohl is quoted as suggesting the Berlin Wall fell because the Soviet bloc faced economic ruin and “not because the holy spirit” blessed civil rights marches in the autumn of 1989. He also dismissed former Soviet leader Mikhail Gorbachev as a political “failure” and his own heir, finance minister Wolfgang Schäuble, as a disappointment.

Dr Kohl intervened after the book was published to prevent subsequent print runs and the Cologne court on Thursday upheld a ban on reprinting 116 passages of the book which it said had derived from confidential conversations.

Mr Schwan had argued that he had given Dr Kohl the option of switching off the tape recorder when discussing matters he did not want published. His publisher Heyne, a division of Penguin Random House, said it would appeal the ruling.

The former politician retired from politics in 1998 and was later hit by a scandal involving illegal political donations. Since 2008 Dr Kohl has suffered ill health, has difficulty speaking and is confined to a wheelchair.