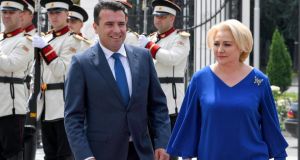 Macedonian prime minister Zoran Zaev has urged compatriots and his nationalist opponents to back a deal to rename their country in a September referendum and open the nation’s path to the EU and Nato.

Macedonia agreed last month to change its name to North Macedonia, in return for Greece lifting its objections to the country moving towards Nato and EU accession. Athens has complained for decades that Macedonia’s use of the same name as a province in northern Greece implies territorial designs on the region.

Nationalists in both countries oppose the deal, however, and to come into force it must be approved in a referendum in Macedonia and a parliamentary vote in Greece.

“Every one of us is obliged to take responsibility for their own future and for the future of their own country,” Mr Zaev said on Tuesday, according to Macedonia’s MIA news agency. He also called on “all honest members” of the main VMRO-DPMNE nationalist party to “understand the significance of the moment”, telling them: “The door is open.”

In a subsequent tweet Mr Zaev added: “This is the moment for a decision. Now is the time for courageous steps. It is time for patriotic decisions. Go out and vote!”

Macedonia’s parliament approved a proposal on Monday for a September 30th referendum on the question: “Are you for EU and Nato membership by accepting the name agreement between the Republic of Macedonia and Republic of Greece?”

Deputies from VMRO-DPMNE left the chamber for the vote in protest, and leading party member Igor Janusev said the referendum question was “ambiguous and multifaceted, and above all manipulative”.

The party believes the name deal should be treated as a separate matter from Macedonia’s Euro-Atlantic integration, which the nationalists insist they also support. “The fact that the people are against the entire agreement and capitulation agreed by Zaev is one thing, and the issue of Nato and EU membership is quite another,” VMRO-DPMNE said on Tuesday.

The party also opposes the consultative nature of the referendum, which would in theory allow parliament to override the result of the vote.

It is not clear whether the nationalists will urge supporters to vote “No” in the referendum or call a boycott; the latter would put in question the 50 per cent turnout required for the result to be valid.

The EU and US strongly support the name deal, and want Macedonia to join Nato as soon as possible to deprive Russia of a potential foothold in the Balkans. Moscow, by contrast, accuses the West of “dragging” the country of two million into the military alliance and destabilising the region.

Greece announced last month that it was expelling two of Moscow’s diplomats and banning two other Russians from the country for stirring up protests against the deal with Macedonia.

1 Portraying Sinn Féin as a dangerous party is a political strategy
2 Coronavirus: Global concern grows with sharp rise in infections outside China
3 When the RIC opened fire on a crowd in Ennis during the Clare grain riots
4 Shannon at high risk of flooding as rainfall warning issued for most counties
5 Bernie Sanders cements lead in Democratic race after win in Nevada
Real news has value SUBSCRIBE