Japan’s heatwave puts its traditions to the test

Tokyo Letter: The country struggles to continue as normal as heat records tumble 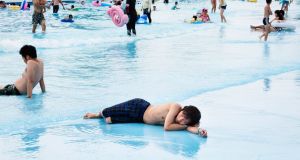 The dawn air in Tokyo is still and thick, like a heavy wet overcoat. By early morning, the thermometer is at 28 degrees and starting its climb to a suffocating afternoon peak of 36.

In this heat, children surface early. Ours sleep with the air conditioner and fans whirring away through the night, heads lying on rubber ice-pillows. They wake complaining of dry throats.

The humidity seeps into futons and clothes and makes the journey from home to train station a sweaty trial. Trains stuffed with perspiring commuters are a great well of rush-hour sullenness.

Tokyo summers are rarely pleasant but this year has made everyone a bit neurotic. Heat warnings ticker for days across the TV screen. The weather killed at least 50 people in the city in July alone.

The population of Waterford – more than 50,000 people – has been hospitalised with heatstroke. School trips have been called off, outdoor pools closed and summer festivals cancelled.

Just before school broke up for holidays, a boy the same age as our oldest fell into a coma and never woke up. He had been out collecting insects in the sun with his classmates.

His death panicked some schools into cancelling closing ceremonies in stiflingly hot gymnasiums. Big-city classrooms have air conditioners but their country cousins are often left to nature’s whim.

Kids have to be watched, warn the old folk. The children dash out and play for hours, ignoring the telltale signs of heatstroke: tingling extremities, goosebumps, strained breathing, and disorientation.

Across Tokyo, men in hard hats descend on potholes and cracks like antibodies around a virus. Some wear clothes fitted with small battery-operated fans

Yet most of the victims are old themselves, passing away unnoticed – sometimes in pairs, such as sisters Shizuko (93) and Miyoko Ogata (84), found lying near each other in their Tokyo flat on July 23rd.

Raised in the burnt-out austerity of the post-war years, the elderly often shun air conditioners, either because of the cost or the belief that they weaken the body’s natural defences.

Instead, they rely on old tricks: going for walks in the sun to beat the heat; downing mugicha (roasted barley tea), cold noodles and heavily salted green beans; cooling themselves with paper fans.

With heat records tumbling, such traditional remedies are becoming redundant. Another vitamin-rich antidote to the summer – sweetened broiled eel – is running out.

Five years ago, after decades of overconsumption, the government designated the eel an endangered species. Prices for it are rising steadily. Japan is the world’s largest consumer.

Disappearing fish and overheating planet or not, life goes on. Kids in the park toss baseballs and afterwards scoff kakigori – sweetened shaved ice that is as quintessentially Japanese as sushi.

We try opening all the windows in our breezeless apartment. After an hour, the temperature hovers above 26 degrees

Roads must be fixed. Across Tokyo, men in hard hats descend on potholes and cracks like antibodies around a virus. Some wear clothes fitted with small battery-operated fans.

The TV says one-quarter of all skilled construction workers in the country are 65 or older. With the pressure on to finish building before the 2020 Olympics, most work six days a week. The government says it will promote a five-day workweek even as the country struggles with its worst labour crunch in decades. Nobody knows how this is going to be done.

In the evening we read how air conditioners are causing summers to heat up even more. Millions of families like ours turn them on to cool down, using more energy, which triggers more emissions.

We try opening all the windows in our breezeless apartment. After an hour, the temperature hovers above 26 degrees and the kids toss and turn on damp sheets. The cooler comes back on.

In bed, I pick up a story by writer Lafcadio Hearn (1850-1904), probably Ireland’s most famous export to this country. In The Dream of a Summer Day he transports himself back to Japan in the eighth-century.

“Summer days were then as now,” he writes, “all drowsy and tender blue, with only some light pure white clouds hanging over the mirror of the sea. Then, too, the hills were the same – far blue soft shapes melting into the blue sky. And the winds were lazy.”

As we drift off to sleep, fans humming, the comforting thought comes that whatever wreckage we do, the hills, sea and sky will still be here long after we’re gone.