Luxembourg set to make all public transport free in world-first

Train, tram and bus fares to be lifted next summer under coalition government plans 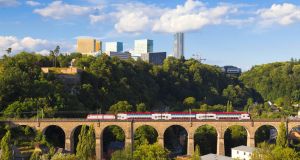 A decision has yet to be taken on what to do about first- and second-class compartments on trains Photograph: iStock

Luxembourg is set to become the first country in the world to make all its public transport free.

Fares on trains, trams and buses will be lifted next summer under the plans of the re-elected coalition government led by Xavier Bettel, who was sworn in for a second term as prime minister on Wednesday.

Bettel, whose Democratic party will form a government with the left wing Socialist Workers’ party and the Greens, had vowed to prioritise the environment during the recent election campaign.

On top of the transport pledge, the new government is also considering legalising cannabis, and introducing two new public holidays.

Luxembourg City, the capital of the small Grand Duchy, suffers from some of the worst traffic congestion in the world. It is home to about 110,000 people, but a further 400,000 commute into the city to work.

A study suggested that drivers in the capital spent an average of 33 hours in traffic jams in 2016. While the country as a whole has 600,000 inhabitants, nearly 200,000 people living in France, Belgium and Germany cross the border every day to work in Luxembourg.

Luxembourg has increasingly shown a progressive attitude to transport. This summer, the government brought in free transport for every child and young person under the age of 20.

Secondary school students can use free shuttles between their institution and their home. Commuters need only pay €2 for up to two hours of travel, which in a country of just 2,590 sq km (999 sq miles) covers almost all journeys.

Now, from the start of 2020 all tickets will be abolished, saving on the collection of fares and the policing of ticket purchases. The policy is yet to be fully thought through, however.

A decision has yet to be taken on what to do about first- and second-class compartments on trains. Bettel only just scraped back into government in the recent election. Opinion polls before October’s poll had indicated that the Christian Social People’s party (CSV) – led for 19 years by the European commission president, Jean-Claude Juncker – would end Bettel’s five years as prime minister.

The CSV, however, lost seats, while the Greens gained three seats. The result gave the coalition 31 seats in the 60-seat chamber. The policy of the new government that has caused the most debate, however, has been that of legalising the purchase, possession and consumption of cannabis for recreational use.
– Guardian