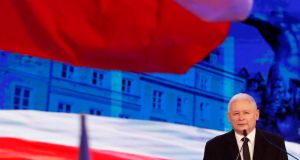 Jaroslaw Kaczynski, leader of the ruling Law and Justice party (PiS). Each MEP is entitled to €24,526 monthly to employ assistants and constituency employees. Accredited assistants can earn up to €9,000 a month. Photograph: Kacper Pempel/Reuters

Poland’s national conservative Law and Justice (PiS) party stormed to power in 2015, capturing an absolute majority with a promise to purge corruption and cronyism from public life.

At least four relatives of PiS officials or employees work in its European Parliament offices – or the Brussels office of its European parliamentary grouping.

The ECR’s press office employs Marta Lipinska, daughter of a PiS deputy leader in Poland, the magazine added, while another PiS deputy leader, Mariusz Kaminski, had a son working in Brussels for three years until July.

Further family connections exist, according to Der Spiegel: sitting in the ECR legal affairs committee is the son of a woman who worked as secretary for 30 years for party leader Jaroslaw Kaczynski. A cousin of Mr Kaczynski has a daughter working as assistant for three party MEPs in the European Parliament.

Each MEP is entitled to €24,526 monthly to employ assistants and constituency employees. Accredited assistants can earn up to €9,000 monthly.

The party told the magazine that all candidates were chosen “because of their training and extensive experience in the European Parliament”.

Similar arguments were put forward by Marine Le Pen after the European Parliament demanded repayment of almost €300,000 paid in salaries to officials it claimed were carrying out constituency work for her party.

Ms Le Pen disputes the claim of pseudo-employment and is appealing against a June court ruling to that effect.

With a general election looming in a year’s time, claims of nepotism come at an inopportune time for PiS as corruption claims swirl around the country’s financial regulator.

Earlier this week prosecutors detained Marek Chrzanowski, the former regulator who resigned last week after a bank owner accused him of demanding multimillion-euro payments to a lawyer for “support”.

Mr Chrzanwoski, a PiS appointee, denies all wrongdoing but Polish opposition parties – long on the back foot – have used the scandal to attack the government.

They tabled a no-confidence motion in the government and are demanding a full, independent inquiry into the allegations, the banking regulator and the central bank president, a close confidante of PiS leader Mr Kaczynski.