George HW Bush, part of a new generation of Republicans was often referred to as the most successful one-term president, has died aged 94. Video: The New York Times 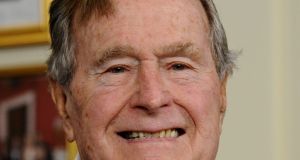 Former President George HW Bush who has died at the age of 94. Photograph: EPA 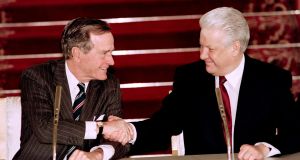 George HW Bush, the 41st president of the United States and the father of the 43rd, who steered the nation through a tumultuous period in world affairs died Friday night at his home in Houston. He was 94.

Mr Bush was denied a second term in the White House after support for his presidency collapsed under the weight of an economic downturn and his seeming inattention to domestic affairs.

His death, which was announced by his office, came less than eight months after that of his wife of 73 years, Barbara Bush.

Mr Bush had a form of Parkinson’s disease that forced him to use a wheelchair or motorized scooter in recent years, and he had been in and out of hospitals during that time as his health declined.

President Michael D Higgins said people in Ireland had learned with sadness of the death of former president.

“President George Bush will be remembered for his long life of public service to the people of the United States and as a president who led his country at a period of significant change at national and global level, between the end of the 1980s and mid-1990s - a period of deep challenges to the multilateral institutions.

“On behalf of the Irish people I offer our deepest sympathies to his family and to the people of the United States.”

Mr Trump issued a statement less than an hour after Mr Bush’s death being announced and the White House lowered its flag to half mast.

America has lost a patriot and humble servant in George Herbert Walker Bush. While our hearts are heavy today, they are also filled with gratitude. Our thoughts are with the entire Bush family tonight – and all who were inspired by George and Barbara’s example. pic.twitter.com/g9OUPu2pjY

“Melania and I join with a grieving nation to mourn the loss of former President George HW Bush, who passed away last night.

“Through his essential authenticity, disarming wit, and unwavering commitment to faith, family, and country, president Bush inspired generations of his fellow Americans to public service - to be, in his words, ‘a thousand points of light’ illuminating the greatness, hope, and opportunity of America to the world.”

The current president noted Mr Bush’s service in the second world war, at the CIA and in political office. He served as vice-president for eight years during Ronald Reagan’s two terms as president, before being elected to the White House himself, culminating in “a peaceful and victorious conclusion of the cold war”.

The statement added: “Along with his full life of service to country, we will remember President Bush for his devotion to family – especially the love of his life, Barbara.

His example lives on, and will continue to stir future Americans to pursue a greater cause. Our hearts ache with his loss, and we, with the American people, send our prayers to the entire Bush family, as we honor the life and legacy of 41.”

Mr Trump has previously clashed bitterly with the Bush family, but the speed and warmth of the statement contrasted with his slow response to the death of Republican Senator John McCain earlier this year. The president did not attend McCain’s funeral, where Obama and George W Bush both delivered tributes.

Mr Obama visited George HW Bush at his residence in Houston earlier this week in what was described as a rekindling of what was already a warm friendship.

On Friday Mr Obama, the 44th president, said in a statement that America had “lost a patriot and humble servant”. He continued: “It’s a legacy of service that may never be matched, even though he’d want all of us to try.

In April, a day after attending Barbara Bush’s funeral, he was treated for an infection that had spread to his blood. In 2013, he was in dire enough shape with bronchitis that former president George W Bush, his son, solicited ideas for a eulogy.

But he proved resilient each time. In 2013 he told well-wishers, through an aide, to “put the harps back in the closet.”

Mr Bush, a Republican, was a transitional figure in the White House, where he served from 1989 to 1993, capping a career of more than 40 years in public service.

A decorated Navy pilot who was shot down in the Pacific in 1944, he was the last of the World War II generation to occupy the Oval Office.

Mr Bush was a skilled bureaucratic and diplomatic player who, as president, helped end four decades of cold war and the threat of nuclear engagement with a nuanced handling of the collapse of the Soviet Union and the liberation of Eastern Europe.

Yet for all his success in the international arena, his presidency faltered as voters seemed to perceive him as detached from their everyday lives. In an election that turned on the economy, they repudiated Mr Bush in 1992 and chose a relatively little-known Democratic governor from Arkansas, Bill Clinton, a baby boomer, ushering in a generational shift in American leadership.

If Mr Bush’s term helped close out one era abroad, it opened another. In January 1991 he assembled a global coalition to eject Iraqi invaders from Kuwait, sending hundreds of thousands of troops in a triumphant military campaign that to many Americans helped purge the ghosts of Vietnam.

But the victory also brought years of American preoccupation with Iraq, leading to the decision by George W Bush in 2003 to topple the Iraqi leader, Saddam Hussein, in a war that taxed US resources and patience.” - New York Times