Some 2.3m people likely to need food aid due to inflation, disruption to local production and Covid making imports difficult 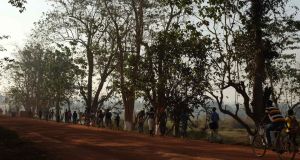 The United Nations is appealing for more assistance for the Central African Republic (CAR), the country least equipped to deal with coronavirus in the world, according to its staff on the ground.

In an interview from the capital Bangui, Maria Rosaria Bruno, the deputy head of the UN Office for the Co-ordination of Humanitarian Affairs in the CAR, told The Irish Times the situation deserved more attention.

She said 2.8 million people, out of CAR’s population of 4.9 million, needed humanitarian assistance and protection.

The majority of them – 2.3 million – are also likely to be in critical need of food aid due to inflation, disruption to local production and the pandemic making imports difficult.

This year the humanitarian community in the CAR had a shortfall of $190 million (€155m) in requested funding. Ireland contributed €2.72 million towards humanitarian assistance there in 2020.

The CAR is bordered by countries including Cameroon, South Sudan, the Democratic Republic of the Congo and Chad. To date it has more than 4,900 confirmed coronavirus cases and 63 deaths, although aid workers say the real numbers could be much higher.

One quarter of the population is displaced, which makes healthcare and follow-ups particularly hard. “It’s a country where people are always on the move,” Ms Bruno said. “Many times people scatter in the bushes where basically there are no services.”

She said militia checkpoints were one of the barriers when it came to accessing healthcare.

The CAR is mineral-rich, but its people are among the poorest in the world. It gained independence from France in 1960, but instability has continued in the 60 years since.

Serious conflict broke out in 2013 when a coalition of mainly Muslim militias, called the Seleka, carried out a coup, toppling then-president Francois Bozize and seizing control of the capital city.

In response, the anti-balaka, a band of Christian militant groups, began to fight back. A UN commission of inquiry later ruled that the anti-balaka had carried out ethnic cleansing against Muslims.

Both sides have been accused of war crimes and crimes against humanity.

“The CAR is traditionally a forgotten humanitarian crisis,” Ms Bruno said. “It’s a country [that is] very fragmented, the government is not present everywhere in the territory, there is a multiplication of armed groups. And what we see today is basically that civilians keep paying the price of the violence.”

Elections for the president and national assembly are due to take place on December 27th.

A report by UN investigator Yao Agbetse found that armed groups continue to occupy hospitals and schools, and ongoing human rights violations – including the recruitment of children, rape, sexual slavery and forced marriage – threaten to undermine any progress being made.