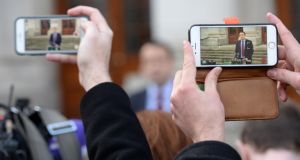 Leo Varadkar: In his handling of abortion he has shown a political subtlety that has enabled him to keep control of the agenda and avoid serious divisions in Fine Gael. Photograph: Dara Mac Dónaill

Taoiseach Leo Varadkar has given some people the impression that he is hedging his bets on the abortion referendum, but what he is actually engaged in looks more like a subtle campaign to bring as many waverers as possible along with him in the campaign to delete the Eighth Amendment from the Constitution.

The prospect of a referendum in June has come only come about because Varadkar firmly committed himself to that deadline shortly after he took over as Taoiseach. Many of his TDs and even some Cabinet colleagues had serious doubts last summer about whether the timetable could be met, particularly as there was no unanimity in Fine Gael about what should replace it.

From the beginning, though, Varadkar seems to have had a clear idea of where he wanted to end up. It suggested as far back as last summer that he had come to the view that the only feasible way of changing the current situation was to permit abortion up to 12 weeks.

The fact that the Oireachtas committee on the Eighth Amendment, chaired by Varadkar’s Fine Gael running mate at the last election Senator Catherine Noone, came to the same view before Christmas was no coincidence.

That is why it surprised so many people when the Taoiseach threw the cat among the pigeons last week by suggesting that unrestricted abortion up to 12 weeks “might be a step to far” for many people.

Some Opposition politicians jumped to the conclusion that he was running scared from the committee’s conclusions and called for clarity about his intentions in advance of the Dáil debate on the committee’s report, which began yesterday.

However, at the Fine Gael parliamentary party meeting on Monday, Varadkar clearly signalled that the Government will accept the recommendations of the committee and will draft legislation to provide for abortion up to 12 weeks to accompany the deletion of the eighth amendment. The party meeting was a carefully staged event, with an outside facilitator, designed to generate the greatest possible consensus.

In his handling of the abortion issue to date Varadkar has demonstrated a level of political subtlety that has enabled him to keep control of the agenda and avoid serious divisions in Fine Gael.

He will certainly not bring everybody around but he most likely has the support of a majority in the Dáil, as well as a substantial majority in the Fine Gael parliamentary party

Bringing doubtful supporters along a difficult path by showing an understanding for their dilemma is a rare political skill. It takes some nerve to pull it off but there are precedents for it in the history of Fine Gael.

Back at the very founding of the State the head of government WT Cosgrave was noted for his ability to bring his party colleagues with him despite their reservations on various issues.

His minister for finance Ernest Blythe told of how Cosgrave had carried out a really difficult feat of persuasion in 1922 when a number of pro-Treaty deputies threatened to resign rather than take the oath which formed part of the newly minted Free State constitution.

There appeared to be no way of bringing the recalcitrant minority around when Cosgrave, to the horror of his cabinet colleagues, announced that he would have to resign with the rebels. “Finally, after a heated debate, the non-juring group of whom Mr Cosgrave was now the obvious leader retired to another room to consider the arguments of the majority,” recalled Blythe.

After half an hour they returned and announced that they had decided to take the oath and remain in the Dáil. “By this little excursion into dramatics Mr Cosgrave averted a minor political crisis which might have had major consequences.”

Varadkar has not gone that far but his strategy has already brought over a number of senior Fine Gael people whose instinct would have been to oppose the introduction of unrestricted abortion at any stage of pregnancy.

Another result of his softly-softly approach to those who are likely to campaign for a No vote in the referendum is that it has helped to keep the debate on an even keel and so far avoided the bitter polarisation that characterised earlier debates on abortion.

One way or another, the issue does not have the capacity to cause the kind of political mayhem that accompanied the original referendum on the Eighth Amendment back in 1983.

The decision of Fine Gael and Fianna Fáil to allow their TDs a free vote on the issue has taken it out of narrow party politics. A number of Fine Gael TDs have indicated their intention of opposing the introduction of unrestricted abortion, while some Fianna Fáil TDs have publicly declared for it.

It means that whatever happens in the campaign and regardless of the outcome of the referendum itself the political fall-out should be limited.