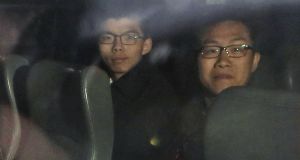 Hong Kong democracy activist Joshua Wong has been sentenced to a second jail term of three months for his “leading” role in the 2014 Umbrella Movement protests that brought the territory to a standstill for 79 days.

Mr Wong and 19 other demonstrators were found guilty of criminal contempt because they refused to obey a court injunction to leave a protest zone that was blocking a main road in late November 2014.

Mr Wong had posted messages in the run-up to the hearing saying activists would not fight the charges in the spirit of civil disobedience.

“They can lock up our bodies but they can’t lock up our minds,” the 21-year-old said as he entered the hearing.

Fellow activist Raphael Wong was jailed for four months, while others were handed suspended sentences.

High court judge Andrew Chan described Mr Wong’s role in obstructing the clearance area as “deep and extensive”, even though he only stayed in the protest area for an hour and a half.

“He played a leading role on that day,” the judge said.

Mr Wong is secretary-general of the Demosisto party, which calls for self-determination for Hong Kong, having risen to prominence as a student leader during the 2014 protests with the Scholarism movement he founded as a teenager.

He was jailed in August for six months for unlawful assembly for sparking the protests. He was bailed pending appeal, and awaits a decision on that verdict.

The protests, which sought free elections for Hong Kong’s leadership, paralysed parts of downtown Hong Kong for 79 days before authorities in the partially autonomous city eventually shut down the protests.

The umbrellas carried by the protesters became a symbol for the democracy movement in Hong Kong. The occupation of major chunks of Central and Kowloon were the most significant act of defiance against rule from Beijing by the Chinese Communist Party.

Hong Kong reverted to Chinese rule in 1997 with guarantees of a high degree of autonomy under the “one country, two systems” rule which guarantees press freedom and an independent judiciary.

The chief executive is selected by business groups, and there are qualified parliamentary elections. In theory, Hong Kong is supposed to become more representative but many fear the constitution, called the Basic Law, is under threat as China tightens its grip on Hong Kong.

Wednesday’s jailings are seen as part of a broad crackdown on protesters who joined the Umbrella Movement, and scores more could go to jail in coming weeks in what activists reckon is an attempt to smother the democracy movement.

As he was being taken away to jail, Raphael Wong said: “Thank you, your honour, for your ruling. Our determination to fight for genuine universal suffrage will not waver.”