Lenin’s tomb reopens to public as Russia emerges from lockdown 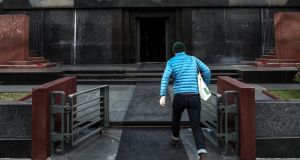 To see the preserved corpse of the former Soviet leader in Moscow, you must wear a mask and gloves and pass a temperature check.

After months in self-isolation, he’s back. Vladimir Lenin, embalmed and entombed, has reopened to the Russian public, luring bold tourists back to Red Square and down a steep set of mausoleum stairs to his resting place for most of the last 96 years.

From early on Wednesday a queue of dozens of people stretched around the mausoleum, past the Kremlin walls and up to the red-bricked historical museum. To see the preserved corpse of the former Soviet leader you must wear a mask and gloves and pass a temperature check. Inside, visitors reported a pungent smell of cleaning solution, perhaps due to a recent sanitisation.

Coming after a three-month break due to the coronavirus pandemic, attendance was subdued. “I’ve never seen the queue so short,” said one young mother, who was taking her daughter and friends from out of town for the first time. It is joked of as a tourist trap. “Muscovites never come here without visitors [from out of town].”

The reopening is another sign that life is getting back to normal in Russia, if normal means displaying a leader who died in 1924 in a glass case to tourists. In a year that has been dominated by coronavirus and a vote to reset Vladimir Putin’s terms as president, the age-old debate over what to do with the Soviet founder’s remains seems quaint, though still divisive.

“I always think how much longer are we going to get to joke about this,” said Ivan Urgant, a late-night television comedian. “Turns out there are more and more places in Moscow opening up where we can spend time with our families.”

The cramped mausoleum’s hasty reopening, even as theatres and cinemas remain closed, however, seemed another instance of Russia’s rushed exit from its coronavirus lockdown.

Already, restrictions have been lifted for political reasons: to hold a military parade marking Victory Day and then a nationwide vote to amend the constitution to allow Putin to run for re-election until 2036. The landslide result has left the president poised to remain in power longer than Stalin (whose body was also on display alongside Lenin’s until 1961).

“Even Lenin’s self-isolation regime was cancelled so that he’d vote for the amendments,” joked Anecdotes from Russia, a popular social media account with 1.4 million followers.

Outside, police officers detained eight activists, including members of Pussy Riot, who protested against the vote by lying down on Red Square and using their bodies to spell out “2036”, the year Putin’s sixth term as president could end.

The mausoleum on Red Square has seen several controversies during the coronavirus lockdown.

Gennady Zyuganov, the Communist Party leader who has run and lost in four presidential elections since 1996, and dozens of his supporters defied a shelter-in-place order in mid-April to lay carnations at Lenin’s mausoleum on the 150th anniversary of his birth.

During Russia’s Victory Day parade, a military spectacle rescheduled to June 24th this year because of the pandemic, the mausoleum was once again covered up, this year with pictures and illustrations of soldiers.

Zyuganov described the cover-up as “unacceptable”, noting that Soviet leaders had watched the first parade from atop the structure. – Guardian