Kremlin insider set to be elected head of Interpol 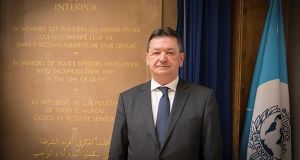 The Kremlin has denounced a group of US senators for interfering in an upcoming Interpol election in which a Russian law enforcer is running for leadership of the global police agency.

Interpol is due to elect a new president at a general assembly in Dubai on Wednesday. Alexander Prokopchuk, a former Russian interior ministry major general who has served as Interpol’s vice president since 2016, is widely expected to win the poll.

On Monday four US senators accused Russia of abusing Interpol by issuing international arrest warrants known as “red notices” to try to detain its political opponents. In an open letter the senators called on all 192 Interpol member states to vote against Mr Prokopchuk, saying his appointment as head of Interpol would be akin to “putting a fox in charge of a henhouse”.

The Kremlin hit back on Tuesday, slamming the US senators for election meddling. “This is probably some kind of interference in the electoral process of an international organisation,” Dmitry Peskov, Vladimir Putin’s spokesman, told reporters in Moscow. “Of course we are rooting for the Russian candidate.”

Russia is not the only country that uses Interpol to pursue its foes across the globe, but it is among the most active. Opposition activists, human rights defenders and businessmen have found themselves at risk of arrest abroad as Russia exploited the red notice system for political ends.

Michael McFaul, a former US ambassador to Russia, said he could not imagine how a Russian candidate could be seen fit to head Interpol. “Russia has an unimpressive record of practising the rule of law at home and a proven track record of abusing red notices and diffusions for political purposes,” he tweeted.

Bill Browder, a US-born fund manager-turned-activist who has become a vocal opponent of the Kremlin since his former lawyer Sergei Magnitsky was tortured and died in a Moscow jail in 2009, said he had been detained six times in various countries while Interpol tried to verify red notice warrants for his arreat issued by Russia.

Appointing Mr Prokopchuk as Interpol’s president would be like “putting the mafia in charge of the world’s most important crime fighting organisation”, Mr Browder told a press conference in London on Tuesday. “If a Russian heads Interpol it will derail the institution to the point that it will probably have to be fixed or changed,” he said.

Mikhail Khodorkovsky, a former Russian oil oligarch who now lives in exile in Europe, said he was sure that if Mr Prokopchuk became head of Interpol he would use his position to “serve the interests of the Kremlin” without “concern for his reputation”.

Russia’s interior ministry complained that unnamed Kremlin critics were campaigning to undermine Mr Prokopchuk’s candidacy. Mr Prokopchuk was a “respected professional” who would, if elected , lead Interpol in “the interests of the international police community”, the ministry said in a statement on Tuesday.

Mr Prokopchuk is running against Kim Jong Yang, a South Korean police officer who is currently serving as Interpol’s interim president, at the election on Wednesday.

The ballot in Dubai is a secret one in which Ireland is represented by the Garda assistant commissioner Michael O’Sullivan, the force’s head of security and intelligence.

The Department of Justice told The Irish Times it was for the Garda to decide who to vote for.

In reply to queries, Garda headquarters said that “in order to respect the process of electing the interim president of Interpol it would not be appropriate for An Garda Síochána to discuss its voting intention”.