Brexit: May vows to press on with deal despite opposition

British prime minister Theresa May says that any proposed challenge to her leadership risks delaying the Brexit negotiations. Video: Reuters 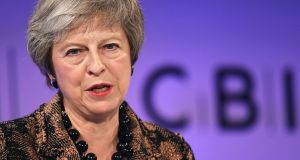 British prime minister Theresa May has vowed to stick to her contentious draft European Union divorce deal ahead of an “intense week of negotiations”.

“We have in view a deal that will work for the UK and, let no one be in any doubt, I am determined to deliver it,” Mrs May said at the Confederation of British Industry (CBI) annual conference on Monday.

“We are not talking about political theory but the reality of people’s lives and livelihoods.”

“While the world is changing fast, our geography is not: Europe will always be our most proximate goods market, and ensuring we have free-flowing borders is crucial,” Mrs May said, citing the importance of the automotive industry.

The EU and UK reached a deal last Tuesday on a draft Brexit withdrawal agreement, including a mechanism to guarantee that there will be no hard border on the island of Ireland.

The agreement, which runs to hundreds of pages, includes a UK-wide customs backstop with provisions for extra alignment with EU rules in Northern Ireland, although the deal has been met with opposition from members of her own party, who are hoping to force a no-confidence motion in her leadership, the DUP and Labour.

Mr Barnier told a news conference after briefing the 27 national EU ministers that they generally approved of the draft divorce agreement reached last week, and that a blank in the document on the end-date for a possible extension of the status-quo transition period should be resolved before a summit on Sunday.

“We are in fact at a decisive moment in this process; no one should lose sight of the progress that has been achieved in Brussels and in London,” Mr Barnier said. “The deal is fair and balanced.”

Meanwhile, Northern Ireland secretary Karen Bradley said the controversial Brexit deal cannot be renegotiated and if it is rejected the UK will exit the EU without a deal.

“If parliament chooses to reject that deal, there is no other option on the table. That would mean leaving without a deal,” Ms Bradley told a business conference in Northern Ireland.

She said: “Be under no illusions, not accepting this deal is not an easy choice. It is a disorderly, potentially very chaotic exit from the European Union for the UK and I certainly believe very strongly that politicians from the whole of the United Kingdom should put that national interest first.”

Influential farming and business organisations in Northern Ireland have urged the DUP to drop their opposition to the draft Brexit deal.

Uncertainty over the deal pushed Ireland’s State borrowing costs to the highest level since May, due to concerns about the impact of a no-deal Brexit on the Irish economy.

The Ulster Farmers Union (UFU), which represents thousands of farmers, many of whom would traditionally vote DUP, has called on the party to vote for the text, claiming a no-deal Brexit would be “absolutely disastrous” for the farming and agri-food sector in the region.

The DUP, which supports Mrs May’s government, is facing similar calls from figures within the commercial sector.

As Mrs May continues to bolster support for the deal EU foreign ministers including Minister for Foreign Affairs Simon Coveney will meet on Monday to discuss arrangements for a special summit on Sunday where the remaining 27 EU member states will sign off on the deal.

The prime minister also faces the possibility of a no-confidence vote, of her opponents can garner the required support.

MPs from the Brexit-backing European Research Group reiterated on Monday that it still hoped to bring about a no-confidence motion on Mrs May by gathering the 48 MPs’ letters they needed, to be sent to Graham Brady, chair of the backbench 1922 committee.

One ERG member, Newton Abbot MP Anne Marie Morris, told BBC1’s Breakfast there was “no question” the threshold of 48 letters would be reached this week.

She said Mrs May “has had one of the most difficult jobs” to do, and that the prime minister is “not going to deliver Brexit”. The number of letters submitted to the committee to date is unclear.

Mrs May also faces pressure from a group of cabinet ministers who have stayed in her government but hope to persuade her to seek an amended deal with Brussels, including the Commons leader, Andrea Leadsom, the international development secretary, Penny Mordaunt, and the environment secretary, Michael Gove.

Earlier, the head of the CBI said that the game of risk over Brexit could lead to an accidental no deal.

“While other countries are forging a competitive future, our nerve centre here, Westminster, seems to be living in its own narrow world,” said director-general Carolyn Fairbairn.

“It seems to be playing a high-stakes game of risk, where the outcome could be an accidental no-deal. Surely, surely, we can do better than this.”

CBI president John Allan said the deal was imperfect, but a step forward because the political turmoil was already damaging investment into the economy.

It also emerged on Monday that the British government is open to the idea of extending the Brexit transition period up to the end of 2022, business secretary Greg Clark has said.

Such a move would be likely to further enrage the Conservative party plotters who hope to remove Mrs May.

Mr Clark was endorsing an idea raised by Mr Barnier, which could keep the UK tied to Brussels rules for up to two further years.

At a meeting of ambassadors from the EU’s 27 member states, Mr Barnier proposed the idea of extending the transition period beyond the agreed 21-month limit, taking it to December 2022, allowing two extra years to negotiate the relationship.

Asked about the idea, Mr Clark said the option of extending the transition period at “our discretion” could help businesses having to potentially change working practices twice, but avoiding the chance of the backstop guarantee coming into force if a final trade deal had not been sealed in December 2020.

But in his interview, Mr Clark dismissed the idea that the deal could be changed at this stage. He said: “If you think about the time that’s gone into that negotiation, and the detail it comprises, I think this deal – which is a good one in my view – is the one that will go to the European Council.” – Agencies/Guardian