Kosovo warns Serbs not to push for more autonomy 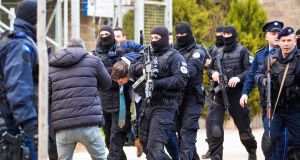 Kosovo’s government has warned its Serb minority not to launch a unilateral bid for more autonomy, as western powers and Moscow waded into a dispute over the expulsion of a senior Belgrade official from the country.

Marko Djuric, the Serbian government’s chief negotiator on Kosovo issues, was roughly detained and deported from the mostly ethnic Albanian country on Monday, prompting the Serbian List party to withdraw from its ruling coalition.

Serb deputies and mayors from around Kosovo gathered in the ethnically divided town of Mitrovica on Wednesday, and pledged to create a so-called community of Serb municipalities (ZSO) next month without government permission.

Pristina and Belgrade agreed in a 2013 EU-brokered deal to the formation of the ZSO, to protect Kosovan Serbs’ rights and give them broad autonomy, but it is yet to take shape.

“If Pristina does not establish the association, then we will establish it ourselves on April 20th,” said Goran Rakic, leader of Serbian List. “This [association] is an obligation for Pristina and Brussels. It will serve the citizens and will not be against anyone. We are for peace and dialogue.”

Perhaps the EU’s main aim in overseeing arduous and often tense talks between Pristina and Belgrade has been to unify Kosovo and gradually erase “parallel structures” run by Belgrade in the north and other mostly Serb areas.

Brussels and Pristina fear that Serbs’ unilateral creation of the ZSO may again widen divisions in Kosovo and hamper the search for a comprehensive deal between the Balkan neighbours that would allow both eventually to join the EU.

The office of Kosovo prime minister Ramush Haradinaj said the creation of the ZSO “is an obligation that Kosovo has undertaken . . . and it will be implemented in the near future”.

“Any initiative that is not based on the laws and democratic procedures of the Republic of Kosovo will not be implemented and will not be respected.”

Kosovo’s infrastructure minister, Pal Lekaj, warned that Serbs could be arrested “the moment they [go] against the law and the constitution of Kosovo”.

Serbs were furious with how a Kosovo special police unit raided a meeting in Mitrovica and arrested Mr Djuric for illegally entering the country, before frogmarching him through central Pristina and finally expelling him.

“What happened . . . must not happen again,” EU foreign policy chief Federica Mogherini said after talks with Serbian president Aleksandar Vucic, in a call for calm that was echoed by the US state department.

Russia is Serbia’s main ally in rejecting Kosovo’s 2008 independence declaration, which has been recognised by some 115 states.