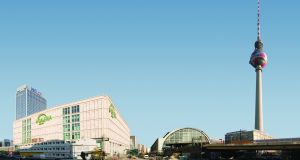 Berlin’s Alexanderplatz. With the German city’s tourist boom – 31 million overnight stays last year, up 2.7% on the previous year – many landlords are favouring the short-term rental market.

Berlin has admitted failure in its efforts to tackle a housing shortage by cracking down on holiday lets via online portal Airbnb.

An Irish legal loophole has turned the holiday apartment ban, enforced from last May, into a paper tiger.

Berlin officials admit their ban failed to hit the home-sharing giant or improve the housing situation as it was continually undermined by inventive landlords and obliterated by local courts.

Berlin’s state government, the senate, will on Tuesday present a second, more lenient law. Instead of an all-out ban on commercial holiday rentals, the revised law will allow 60 nights’ rental per year without a permit.

As with the original ban, however, city authorities concede that Airbnb’s European base in Dublin makes it difficult – if not impossible – to stop landlords renting out entire apartments as holiday lets well beyond the 60-day limit.

“We see them as breaking the law,” says Katrin Dietl, press spokeswoman for the Berlin’s state housing ministry. “Airbnb should give us the information of people who illegally rent out apartments.”

For years, Berlin authorities have accused Airbnb of “bending the law”, demanding it release information on landlords using the platform in the city. In July, a Berlin court threw out a legal demand for information from the city, ruling that the location of Airbnb’s European headquarters in Dublin put the company beyond German jurisdiction.

It’s a method used by other large US tech companies such as Facebook and Google. With a headquarters in Dublin, these companies can benefit from Irish regulations and remain out of reach from the local authorities elsewhere in Europe.

Though Berlin would beg to differ, Airbnb insists it is a co-operative “partner” with governments across the world. Governmental requests for private user information, the company says, must pass through a “valid legal process”.

“We regularly share information and data about our community,” said a spokesperson. “However, there is a clear difference between sharing aggregated data on the Airbnb community and sharing their personal details.”

It is estimated that approximately 20,000 new houses and apartments are needed in Berlin per year to deal with a housing shortage caused by a growing population.

After the ban was enforced from last year, Airbnb Berlin listings dropped by about 40 per cent but have risen again steadily since then. On Sunday, Airbnb had 16,558 listings in the Berlin area.

The original Berlin law outlawed commercial rentals of entire flats but permitted single room rentals with a permit. Airbnb insists it is representing “regular families who share space in their own home”.

However, over half of Airbnb rental listings in Berlin on Sunday – some 8,669 – appear to be entire homes or apartments, many available year-round. Asked about this, Airbnb insists it is not a platform for full-time holiday-let landlords.

Berlin state government has no figures for holiday lets because city districts are responsible for policing and enforcing the ban.

No central figures exist because Berlin’s individual districts are responsible for policing and enforcing the ban. The Tempelhof-Schöneberg district says it employs six enforcers, has fined landlords a total of €173,004 and has returned 939 holiday apartments to the market. Citywide, however, it is believed the ban has returned only a few thousand apartments to the long-term rental market.

“The ban on short-term rentals alone cannot cope with the shortage of housing,” says Wibke Werner, a spokeswoman for the Tenancy Association of Berlin. “It should be seen only as one of a number of measures.”

But with Berlin’s tourist boom – a record 31 million overnight stays last year, up 2.7 per cent on the previous year – many landlords now favour the short-term rental market.

“For landlords, the daily rental model is more lucrative,” says Ms Dietl of Berlin state government. “If you charge €100 a night, that’s €3,000 a month. Regular rents in Berlin have increased quite a bit, but not by that much.”