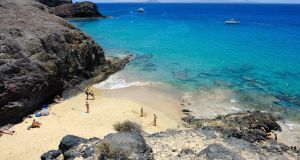 “We don’t want it to end like this,” says Tracy Conway, who has been running Murphy’s Irish pub in Lanzarote with her business partner Frank Burns from Clare, for over 20 years.

The pub is closed and there are no plans yet to re-open it. Conway, a native of Mooncoin, Co Kilkenny says 80 per cent of pubs on the island are closed.

Unless the Irish Government adds the Canary Islands to its green list for international travel, as the Spanish authorities have requested, she worries for the future of her bar, which faces on to the beach and is a popular local for Irish holiday makers wanting to keep tabs on major GAA fixtures at home.

“I’d say 90 per cent of our customers are Irish and most of them are regulars who return every year,” she says.

She believes the stringent measures imposed by the authorities throughout the pandemic crisis, have made it safe for tourists to return. “For us it’s second nature now. When you leave the house you do the check – keys, phone, bag and mask. If you see anyone out without a mask it’s a tourist, not a local”.

There have been six coronavirus-related deaths on the island, which has a permanent population of 150,000, and welcomes three million tourists each year.

Life has changed dramatically for those Irish people who have made the Canary Islands their home, and are adapting to the sight of deserted beaches, shuttered hotels and empty apartment blocks.

“It’s very eerie when you walk down the strip [Avenida de las Playas] and all the restaurants and bars are closed,” says Conway. She says a few English bars which were recently adapted at some cost to meet the social-distancing requirements, may now remain closed following British prime minister Boris Johnson’s about turn on quarantine requirements last week.

With tourism the only game in town in places such as Lanzarote and Tenerife, the sector will struggle if the islands are not separated from mainland Spain when countries compile their green lists.

The co-owner of Murphy’s got “caught” when he visited Ireland in February and was unable to get back to Lanzarote. “Frank went home for a visit but he is over 70 so he couldn’t get back,” Conway explains.

She hasn’t seen her mother for 12 months. “I go home every year for the All-Ireland, whether Kilkenny is in it or not,”she says. “I normally pop home for a visit two or three times a year but I don’t know when I will get back now.”

Kerry native Noelle Corridan is hoping to fly home from Tenerife for a wedding on November 13th.

She booked the flight last February but if the Canary islands don’t make it onto Ireland’s green list, she will miss the wedding.

The retired businesswoman believes there are a lot of people on the islands who are much worse off than her.

“It is very very important that the Canaries are added to the list. People are hungry here,” she says.

Having lived in Tenerife for 37 years, Corridan, who is one of the organisers of the annual St Patrick’s Day gala dinner there, is horrified at what the collapse in tourism since lockdown has done to the economy.

“We don’t have any factories or businesses really that don’t revolve around tourism,” she explains.

With the big hotels still closed and smaller cafes and bars slowly getting back in business, she knows of people who are depending on food parcels. Many workers had to wait six to eight weeks before the local version of a Pandemic Unemployment Payment was paid.

According to Corridan, a lot of retired Irish people who own apartments in Tenerife and who spend winters there, opted not to go home last February when the global crisis kicked off.

“They decided that they wouldn’t see their children and grandchildren even if they did go home, and here they could sit out on their balconies in the sun,” she explains .

Those who stayed on the island were, like locals, subject to very stringent restrictions.

“We didn’t get a 2km zone around homes. You had to stay within your own compound, your home, and your garden, if you had one, and you were liable to be stopped if you breached that.

“We had that for three months.We did it to curtail the numbers,” she says.

Beginning to pick up

Former RTÉ producer and editor Cliodna O’Flynn, who has lived in Tenerife for 21 years, pointed out that there has been no coronavirus-related death there since June 12th. The total death toll in the Canary Islands, which has a combined population of 2.2 million, is 162.

Four months ago O’Flynn was reporting from the hotel in Tenerife where 1,000 guests, some of them Irish, were stranded after an Italian tourist tested positive for the virus.

Like all the Irish people living there, she believes that the measures taken by the authorities since, to control the virus, have been so successful that last week’s “flip flop” by Johnson on the issue of travel there is unwarranted. “Things were beginning to pick up,” she says.

With British holidaymakers facing a quarantine if they do visit the Canary Islands, local businesses are bracing themselves for a very quiet August. “But winter is a big season too,” O’Flynn points out, so there is some hope that things will turn around.

The communications and liaison officer with the local town hall will be prevented from seeing her own family in Dublin if the quarantine laws are not eased. “I’d like to go home to see my sisters for a few days, sit out in the garden with my Dad who is in his eighties. I normally pop over to Dublin in the summer but if it’s not allowed it won’t ruin my Iife. I won’t break the rules”.

Leitrim born Martina Bowe says it’s still eerie to walk the promenade in Tenerife because all the big hotels and bars are still closed.

The president of FAILTE (Friendly Association of Irish Living In Tenerife) says the restrictions were so stringent that they managed to control the spread of the virus very effectively.

“The response to the virus here was excellent. They shut down and that was that. It was policed really well”.

The re-opening of businesses has been a slow process, she says.

“The beaches were all closed down during lockdown. Walking to the supermarket was a surreal experience because there were so few people around. It was actually scary because it was so quiet.”

She says she would have no worries for Irish tourists if they did come. “It is as safe as a house now. We would give them 100,000 welcomes.”