‘I knew this would be difficult, but I think Italy needs us to do the job we’re doing’ 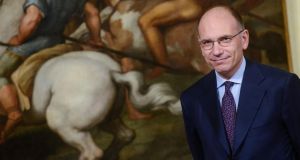 Italian prime minister Enrico Letta: says jokingly that, given Italy continues to fail to spend €30 billion of structural funds, he should get lessons in Dublin on how to use EU funds. Photograph: Giorgio Cosulich/Getty Images

Given the almost hourly vicissitudes that rattle his cage, you might expect Italy’s prime minister Enrico Letta to be a man stuck in a moment halfway between a slough of despondency and total insanity. Remarkably, when he meets up with The Irish Times at Palazzo Chigi, government house, the 47-year-old seems just fine and dandy, even ready to laugh at your correspondent’s jokes.

In his shirt sleeves, the suave Mr Letta looks just a tad casual by the standards of his 16th century surroundings. Until a month ago, notwithstanding the fact that he has been prime minister since April, few people outside of Italy had probably ever heard of Enrico Letta.

One month ago, however, Mr Letta did something not many in Italian public life have managed to do in the past 20 years. He went head-to-head with media tycoon Silvio Berlusconi, stared him down, forced him to back off and in the process won a crucial parliamentary confidence vote.

‘Balls of steel’
That little incident did not go unnoticed. In a one-on-one interview with him this week, your correspondent asked Mr Letta if he knew what people in half the chancelleries of Europe were saying about him these days: “Oh yes, they say that Letta has balls of steel.”

As he prepares to travel to Dublin today for a meeting with Taoiseach Enda Kenny, Mr Letta is clearly quietly satisfied that he is still in the government saddle. After all, he heads an unprecedented centre-right, centre-left coalition in which his main partner is the People Of Freedom (PDL) party of Silvio Berlusconi.

When this government was formed in the wake of February elections that threw up a three-way “hung” parliament, plenty were ready to say that it would not last until Christmas. Government with a party that Mr Berlusconi continues to orchestrate from off-stage was never going to be easy.

Your correspondent suggested to Mr Letta that his government experience was a bit like finding yourself in a ski lift carriage halfway up an Alpine mountain with a very troublesome travelling companion. Every 10 yards, your partner attempts to throw you out of the ski lift, without a parachute. Every other 10 yards, he threatens to jump out of the ski lift himself, with a parachute. Is it really that bad?

“I knew right from the beginning,” he says with a laugh, “that this would be difficult and that has certainly been the case but I think that Italy needs us to do the job that we’re doing at the moment.

“We’re in November, we’re still here, I still think we have every prospect of continuing to do a good job in the months ahead, months when the whole framework of European politics needs to be reformed.”

If Mr Letta has thus far held his nerve and held his government together, that owes something to his pedigree and track record.

Politically active for more than 20 years, he was already a minister for EU affairs in 1998 at the age of 32. In the land of gerontocracy, he is clearly an exception but he is no babe in the woods.

Furthermore, politics runs in the family. His uncle, Gianni Letta, just happens to be a lifelong advisor and political ally of Silvio Berlusconi.

Mr Letta travels to Ireland today essentially on EU business, in preparation for the EU December summit, the European elections next May and the Italian EU presidency next June. Given that the Irish presidency earlier this year focused on issues that matter to Italy, such as youth unemployment and banking union, today’s meeting is a “sort of passing of the baton”.

Ireland’s crisis
The Italian prime minister says he admires the way in which Ireland, “with difficulty has got out of its crisis, managing to put its house in order”.

He also says jokingly that, given that Italy continues to fail to spend approximately €30 billion of structural funds, maybe he should get lessons in Dublin on how to use EU funds.

As your correspondent stood up to leave, the next person in to see the prime minister was Giusi Nicolini, mayor of Lampedusa, the Mediterranean “boat people” island where more than 350 immigrants drowned early last month. When Mr Letta speaks of EU “reforms”, high on his list comes the whole complex question of migration.

He argues that the boat people crisis “owes everything to the failure of the Arab spring, something we all probably perceived in much too superficial a manner”.

He believes, however, that as indicated by the visit of European Commission president José Manuel Barroso to Lampedusa, the EU has already begun to “make an important change of direction” in relation to migration.

Changing direction is something Mr Letta does not intend to do. He remains firmly in the government saddle.