Tight controls will continue in Budapest, but other areas in Hungary with lower infection rates will start to relax restrictions 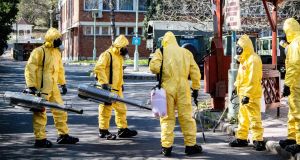 Hungary’s government plans to ease coronavirus lockdown measures across most of the country next week, but tighter controls will continue in Budapest, schools nationwide will stay closed and big public events remain banned.

Officials announced 48 new cases of the Covid-19 virus and 12 more deaths on Thursday, bringing the total number of people infected in Hungary to 2,775, of whom 312 have died. About 70 per cent of all known cases are in Budapest.

“The first phase of the containment effort has come to an end...As I see it our joint efforts have resulted in the Hungarian healthcare system now being prepared to cope with even a massive numbers of patients,” said Hungarian prime minister Viktor Orban.

He said particular effort would continue to be focused on protecting the elderly from the disease and combating it in Budapest. However, other areas with much lower infection levels could start to relax the lockdown from Monday.

“There the current restrictions on the opening hours of shops will be lifted, and the terraces and gardens of restaurants and cafes may reopen, as may outdoor bathing facilities,” Mr Orban announced on Wednesday night.

“In shops and on public transport, however, it will continue to be compulsory to keep at a distance of one and a half metres from one another and to wear face covering or a face mask.”

Gergely Gulyas, Mr Orban’s chief-of-staff, said on Thursday that schools would stay closed until at least the end of May, except for final-year pupils who would start exams next week.

“With a maximum 10 students in a room, keeping a safe distance, with the smallest possible risk the exams can be held...as it is in everybody’s interests that students should be able to continue their studies [at universities],” Mr Gulyas said.

However, events involving more than 500 people remain banned until August 15th, dealing a crushing blow to most of Hungary’s popular summer music festivals.

The country’s Formula One grand prix could be held behind closed doors in early August or moved to a later date in the hope of welcoming spectators.

Mr Orban’s nationalist government rejects allegations that it has used the pandemic to seize undemocratic emergency powers, and endangered the health of thousands of patients in its rush to free up hospital beds as Covid-19 struck.

Hundreds of Czechs wearing face masks and observing physical distancing joined a protest walk in Prague on Wednesday to question aspects of the government’s handling of the pandemic and highlight long-standing concerns such as corruption.

Officials say the outbreak is under control and lockdown is being lifted gradually in the Czech Republic, where a “smart quarantine” system using phone and bank data to trace those who may have come into contact with infected people is due to start operating nationally on Friday.