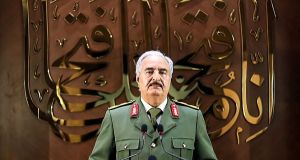 Eastern forces waging war on Libyan capital Tripoli have said they will suspend military operations for the month of Ramadan.

Ahmed Mismari, a spokesman for the Libyan National Army (LNA), said it was motivated by international calls for a break in fighting meant to give authorities time to focus on tackling the coronavirus pandemic.

In response, the UN-backed, Tripoli-based Government of National Accord (GNA) said it will “continue to defend” itself.

Civilians across Tripoli told The Irish Times that they heard loud bombing and explosives on Wednesday night and even Thursday morning.

“Yesterday we listened to the bombing around us,” said one Eritrean refugee. “In the morning they make bombing, but now there is no sound.”

“We are used to hearing explosions, so most of the time we do not give it any attention unless it is very strong,” said a Libyan woman who lives close to the front lines with her family.

Civilians who spoke to The Irish Times were also sceptical that any ceasefire could be maintained. “You can’t trust anyone in Libya [but] I hope it will [last for] long,” said one refugee.

“Recent history doesn’t paint a rosy picture,” said Liam Kelly, Libya country director for the Danish Refugee Council. “There have been three real ceasefire agreements in the last year but only one of them was adhered to, and that for just three days, during Eid last year. So far this time, it hasn’t taken hold.”

Mr Kelly said civilians were concerned by the fighting and the coronavirus pandemic, but also the economic impact of those crises. Libya has 61 confirmed coronavirus cases and two deaths.

“During the last few weeks there have been multiple water cuts and power cuts which also leads to the phone and internet networks going down, as well as the ongoing oil cuts. Areas of western Libyan have been without water for weeks . . . The conflict, the movement restrictions, the oil cuts and the arrival of Ramadan means that prices for basic food commodities are skyrocketing, which is affecting people pretty seriously,” Mr Kelly said.

On Monday, eastern general Khalifa Haftar said he has a popular mandate to rule Libya. He has been battling forces and militias associated with the GNA in Tripoli since April 2019, after ordering the LNA to advance on the capital city.

“We announce that the general command is answering the will of the people, despite the heavy burden and the many obligations and the size of the responsibility, and we will be subject to the people’s wish,” the 76-year-old said, in a televised address.

1 Metro South may be back on table as transport plans for Dublin are reviewed
2 Two men found dead in Dublin city centre
3 Ireland could lose out as France lays claim to most of €5bn Brexit compensation fund
4 Miriam Lord: Dramatic Al sets the stage for a dark day of reckoning
5 Publican blames Covid-19 as Dublin’s Dice Bar to shut for good
Real news has value SUBSCRIBE