China hits back at chorus of criticism over handling of coronavirus 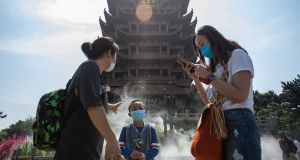 People visit Yellow Crane Tower in Wuhan, China, on Wednesday after it reopened to the public. Photograph: STR/AFP via Getty Images

China is pushing back against the growing chorus of voices around the world calling for the country to pay compensation for the damage caused by the coronavirus pandemic, which originated in the Chinese city of Wuhan.

Politicians in the United States are “lying through their teeth”, a spokesman for the Chinese foreign ministry, Geng Shuang, said at a news briefing on Tuesday.

The spokesman’s comments came one day after US president Donald Trump suggested that the United States would seek “substantial” compensation for Beijing’s handling of the coronavirus outbreak.

Richard McGregor, a China analyst with the Lowy Institute in Sydney, said the dispute reflects China’s refusal to accept criticism at a time when its rival, the United States, seems weak and continues to struggle with the virus, political division and mass unemployment.

“Beijing is mounting an all-hands-on-deck, no-holds-barred, global diplomatic effort to stem any move anywhere to censure it over its handling of the initial coronavirus outbreak in Wuhan,” McGregor said. He stressed that the Chinese government sees this as a pivotal moment “to make a generational advance in their global position at the expense of Washington”.

At a news briefing on Monday, Trump put forth the idea that China could have prevented the coronavirus from spreading beyond its borders. “We believe it could have been stopped at the source,” he said, without offering an explanation of the steps the country could have taken.

He added that the administration was conducting “serious investigations” into the origins of the pandemic and that “there are a lot of ways you can hold them accountable”, referring to China. “We are not happy with China.”

The Chinese government fired right back. “We advise American politicians to reflect on their own problems and try their best to control the epidemic as soon as possible, instead of continuing to play tricks to deflect blame,” Geng said on Tuesday.

China is also defending itself in Australia, where its ambassador warned on Monday that the government’s call for an independent international inquiry into the origins of the pandemic could lead to a Chinese consumer boycott of Australian products and services.

For a country that relies heavily on China – a third of its exports go there – the conflict could carry serious consequences. It reflects a sharp acceleration in tensions, which were simmering before the pandemic over the Chinese government’s attempts to influence Australian politics through donations and pressure.

The current war of words appears to have begun April 17th, when Australia’s minister for home affairs, Peter Dutton, demanded greater transparency from China on the origins of the coronavirus.

The Chinese embassy accused him of parroting American propaganda, but prime minister Scott Morrison – who has worked hard to stay close to Trump – continued to press for more accountability in line with White House demands.

Morrison spoke to Trump on April 21st, and announced a day later that he supported an overhaul of the World Health Organisation, including the recruitment of investigators akin to “weapons inspectors” to determine the source of major disease outbreaks.

In the United States, the state of Missouri filed a lawsuit alleging that Chinese officials were to blame for the pandemic. Geng, the foreign ministry spokesman, called the suit “very absurd” and said it “has no factual and legal basis at all”.

In France earlier this month, the Chinese ambassador was summoned by the foreign ministry to discuss an article posted on the embassy’s website that claimed Western countries were letting older people die in nursing homes. That had led French lawmakers to complain Beijing was spreading misinformation.

That same week, Britain’s foreign secretary, Dominic Raab, said, “There absolutely needs to be a very, very deep dive after-the-event review of the lessons, including on the outbreak of the virus.”

The Chinese diplomats and government-approved voices who are speaking out with boldness may simply be falling in line with the more aggressive efforts by President Xi Jinping to rewrite China’s history with the virus, emphasising its successful containment, according to McGregor.

But they are showing no signs of backing down. Even as editorials in the Australian media argued that China has shown its true colours, as an unreliable, authoritarian partner, on Tuesday night, China’s response intensified. “Australia is always messing around,” Hu Xijin, the editor of Global Times, a nationalist tabloid controlled by the Chinese Communist Party, wrote in a social media post. “I feel it is a bit like chewing gum stuck to the soles of China’s shoes. Sometimes you have to find a stone to scrape it off.” – New York Times