British Prime Minister Boris Johnson's car was rear-ended by a security vehicle outside parliament when Kurdish protesters ran into the road. Video: Reuters 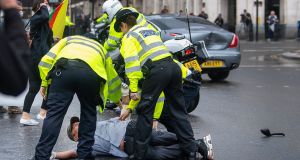 Police detain a man after he ran in front of Prime Minister Boris Johnson’s car (in background with dent) as it left the Houses of Parliament, Westminster. Photograph: Victoria Jones/PA Wire

UK prime minister Boris Johnson has escaped unhurt after a security vehicle collided with the back of the car he was travelling in as he left parliament after prime minister’s questions.

Video of the incident on Wednesday showed the grey Jaguar carrying Johnson pull out of the main gates of parliament as part of a convoy, including police motorcycles.

As they left, a man believed to be part of a protest by Kurdish activists ran towards the prime minister’s car. Though the man, who was reportedly unhurt was pulled back by a police officer on foot, the car stopped suddenly, and a black Range Rover that was next in the convoy failed to stop in time.

Pictures showed the Jaguar with a dent in the rear. The convoy immediately set off again.

No 10 confirmed Johnson had been in the damaged car. A spokesman said: “Yes, that was the PM’s car. I think the video speaks for itself as to what happened. No reports of anybody being injured.”