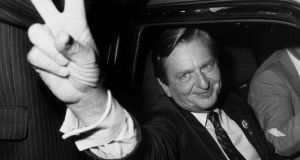 Olof Palme after his election victory in September 1982. The findings of a decades-long investigation into his murder will be made public on Wednesday. Photograph: Bertil Ericson/TT News Agency/ AFP via Getty

After 34 years, 10,000 witness interviews and 134 claims of responsibility, Swedish prosecutors will on Wednesday morning present their findings on the assassination of prime minister Olof Palme in 1986.

The charismatic Social Democratic leader, viewed as the father of Sweden, was shot in the back at close range at a busy intersection in Stockholm. It was 11.21pm on February 28th and he was walking home with his wife, Lisbet, who was grazed by a second shot, after a spontaneous cinema visit.

The gunman – described as a tall man in a dark coat – escaped on foot and the shot, which severed his spine, killed Palme before he hit the pavement.

What lingers for many Swedes, says prime minister Stefan Lövfen, is an “open wound” over the unsolved killing of a beloved leader.

Since 1986 the case has preoccupied a small army of prosecutors and investigators. Palme’s killer was also a personal obsession of Stieg Larsson, author of the Millennium thrillers, before he died in 2004.

In recent days, informed sources said the prosecutor has found the murder weapon and will present the name of the likely killer – now deceased – and close the case for good.

“I am optimistic about being able to present what happened with the murder and who is responsible for it,” said Krister Petersson, Sweden’s chief prosecutor, to SVT public television, in February.

Palme’s meteoric rise, stellar career – and brutal death – have created a myth around the politician that still colours Swedish society.

Born in 1927 to an upper-class family, he joined the Social Democrats in 1949, becoming its leader 20 years later. As a two-term prime minister, first in 1969 and again in 1982, he expanded the modern Swedish welfare model. High taxes were matched with greater spending on hospitals, schools and childcare. The Palme era saw an increase in gender equality and a rise in union influence on public life.

But Palme’s political career was one of constant tension: though lionised by much of Sweden’s influential left, some were wary of his upper-class background; meanwhile many conservatives viewed him as a class sell-out and cheered news of his death.

For many ordinary Swedes, however, the killing remains a source of deep distress. The brutal murder of their leader – without bodyguards the night he died – was viewed as an attack on Swedes’ open way of life.

Palme was one of the cold war era’s most outspoken critics of the US and the Soviet Union. He attacked Moscow’s invasion of Czechoslovakia in 1968, and compared the US campaign against North Vietnam with Nazi concentration camps.

“I can’t keep silent on this issue and won’t be pressurised into silence,” he told the New York Times in 1973, after Washington froze relations with Stockholm as a result.

The passions he provoked in life soon clouded the search for answers about his death. Police detective Lennart Gustaffson, who spent 30 years on the case, told a Swedish newspaper in 2012 that the undimmed, divisive passions about Palme made it possible to “suspect half the Swedish population”.

The cold case was reopened when investigators received a tip-off in 2017 said to have led to the murder weapon: a powerful .357 Magnum handgun.

The first of five main theories suggests the killer was a 33-year-old man who made violent threats against the prime minister. He was arrested but released without charge and was himself murdered in the US in 1993.

A second theory is that Palme was murdered by the Kurdistan Workers’ Party (PKK) after Stockholm declared it a terrorist organisation. But 12 PKK members were questioned and not charged.

A third trail led to Christer Pettersson, convicted in 1988 after Lisbet Palme identified him in a line-up, but he was acquitted on appeal. He died in 2004.

A fourth theory involves South Africa: in 1996 former police officers claimed the government had ordered the killing of Palme in response to his strident critique of the apartheid regime.

The final suspect – and the one many suspect will be named as the killer – is Stig Engström, dubbed the “Skandia man”, after his insurance company workplace adjacent to the crime scene.

He took his own life in 2000 and, two years ago, a Swedish magazine said weapons training and lies to police about his movements made Engström their chief suspect.