Harmony and discord as Putin meets Macron in south of France 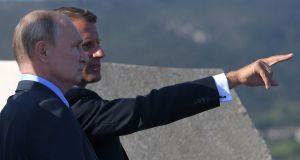 President Emmanuel Macron positioned himself as an intermediary between Russia, Europe and the G7 group of the world’s leading democracies by receiving his Russian counterpart Vladimir Putin at his summer residence on the Mediterranean on Monday.

The meeting was held five days before Macron is set to host the G7 summit at Biarrritz. Russia was expelled from what was the G8 because it annexed Crimea in 2014.

Putin bounded up the stairs to the residence, grinning and holding out a bouquet for first lady Brigitte Macron. The two leaders sat in the afternoon sunshine, with the flags of the EU, France and Russia as a backdrop.

Despite multiple disagreements, France, the EU and Russia must work together to find common ground on the crises that concern them, say Macron’s advisers.

“The role of France is to protect her interests, to take initiatives,” an adviser said. “We must be able to go where others do not . . . That is what the president’s diplomacy is about . . . If the president of the republic does not do this, who will?”

Putin smiled broadly as Macron cited great Russian cultural figures. Nabokov, Turgenyev, Stravinsksy. “Dostoyevsky said Russians were most Russian when they were most European . . .” he continued.

Could Macron really be talking about the country that annexed Crimea, and backs separatists in the Donbass region of Ukraine and nationalist populists across Europe? The country that meddles in western elections and shares responsibility for downing the Malaysian Airlines plane? That poisoned the former Russian agent Sergei Skripal and his daughter in the UK?

“Russia has a history of political liberalism,” Macron said, implying there were errors of translation when Putin disparaged liberal democracy. “Political liberalism is the Europe of the Enlightenment. That means believing in free, rational individuals. Russia believes this or I have got my history wrong; the special ties between Catherine the Great and so many of our philosophers . . .”

Putin thanked Macron for accepting his invitation to attend ceremonies marking the 75th anniversary of the second World War next May.

But Putin visibly irked Macron by comparing his own treatment of Russian opponents to the Macron administration’s handling of gilets jaunes or yellow vest protests.

About 3,000 people have been arrested in Moscow since a protest movement started against what is seen as the rigging of upcoming municipal election. Dozens of candidates have been disqualified, and the state has severely limited demonstrations.

Russia remains “within the framework of the law,” Putin said, claiming he wanted to avoid “a situation like the gilets jaunes in France . . . During the gilets jaunes demonstrations, dozens of people were wounded, as well as policemen.”

A cloud passed over the outdoor press conference. “We are party to international accords which mean that freedom of expression, of opinion, the freedom to demonstrate and stand in elections must be respected in our democracies,” Macron said dryly, referring to Russia’s recent return to the Council of Europe, which was championed by France.

The leaders also clashed regarding war in Syria. “We are deeply worried about the situation in [the northwestern province of] Idlib,” Macron said. “For today, attacks by the regime [of President Bashar al-Assad] are killing innocent civilians, in particular children.”

In contrast, Putin said “terrorists” now control 90 per cent of Idlib and regularly mount raids from the area. “They have attacked our airbase at Khmeimim several times. We welcome the efforts of the Syrian army to end this terrorist threat . . . We have always said the fight against terrorists would continue to the end in this zone.”

Both presidents expressed hope that the election of Volodymyr Zelensky, who became president of Ukraine on May 20th, might unblock negotiations through the stalled “Normandy format”, comprised of France, Germany, Russia and Ukraine. They promised to organise a summit soon, but only if there was a serious chance of tangible progress.

US president Donald Trump has renounced both the climate agreement and the July 2015 nuclear accord with Iran. France and Russia are in harmony on both issues, though France also insists that Iran continue to abide by the terms of the Joint Comprehensive Plan of Action, despite Trump’s attempts to sabotage the agreement.

“There’s a nuance in the language [on the nuclear accord],” says a source at the Élysée. “The Russians insist more on US responsibility, and in view of the intensity of their relations with Iran, they are more inclined to be indulgent towards Tehran. Nonetheless, our positions are fundamentally very similar.”

Instex, the barter mechanism established by the EU to enable European companies to continue to trade with Iran, is not yet functioning. The Élysée said that was the fault of Iran, because it has not established a “mirror structure” to make the system work.