Drone footage shot on Thursday (July 26) showed the extent of the devastation after a deadly wildfire ripped through the Greek coastal area of Rafina, killing at least 83 people. Video: FlyGreeceDrone 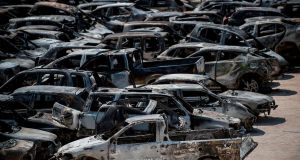 Burnt-out cars parked outside a football stadium following a wildfire at the village of Rafina, near Athens. Photograph: Angelos Tzortzinis/AFP/Getty Images

Greece said on Thursday it suspected arson was behind a devastating forest fire which killed at least 83 people and turned the small town of Mati east of Athens into a wasteland of death and destruction.

In one of the worst Greek disasters in living memory, Monday night’s blaze trapped dozens of people in their cars trying to flee a barrelling wall of flames.

“We have serious indications and significant signs suggesting the criminal actions of arson,” Civil Protection Minister Nikos Toskas told a news conference. He said police had testimonies to that effect, but did not elaborate.

His comments came as grief turned to anger in Greece, with many relatives of those killed in thewildfires blaming an inept state apparatus for the scale of the disaster.

In Mati, the coastal village almost entirely obliterated by the blaze, the defence minister, Panos Kammenos, was heckled on Thursday as authorities announced that the death toll had risen to 85. Those killed included Irishman Brian O’Callaghan-Westropp.

Residents who had lost loved ones and homes rounded on Mr Kammenos, telling him: “You let us burn. You left us to the mercy of God.”

Mr Kammenos, who heads the leftist-led coalition’s junior partner in office, Independent Greeks, was the first high-ranking official to visit Mati, four days after the fires, propelled by winds of up to (124km/h, tore through the area east of Athens. The absence of any official presence in a community so devastated, has added to the acrimony.

The wildfires, which have also left countless missing, more than 180 injured and at least 11 fighting for their lives, are now being described as the worst to hit the continent since the second World War. No other country, with the exception of Australia, has suffered such loss of life or destruction as a result of wildfires this century.

The government’s lack of preparedness to deal with a disaster of such scale has been especially criticised. On Wednesday Alexis Tsipras’s administration announced generous relief measures but the public anger showed little sign of abating.

Local mayors, instead, stepped up complaints of inadequate evacuation plans. Residents took to the airwaves to complain of the deadly traffic jams that emerged when misdirected drivers saw their only escape routes cut off by authorities. Trapped in the inferno, many died in their cars. “Why did you close Marathonas?” one sobbing woman asked Mr Kammenos, referring to the main road that leads from Mati to Athens.

Echoing other government officials, Mr Kammenos told the BBC that escape routes had been blocked because so many houses in the area had been illegally constructed on land illicitly cleared by developers.

As rescue crews stepped up efforts to locate the missing – going from home to home, sifting through ruins, and scouring the charred landscape around Mati – two more bodies were found on Thursday.

Search efforts are expected, increasingly, to extend to the sea, where hundreds rushed on the night of the fires to escape flames moving with extraordinary speed through the seaside village.

“The search to find them will not stop until every building and area affected by the blaze has been checked,” said the fire service’s spokesperson, Stavroula Malliri.

The plight of two nine-year-old twins, among those still unaccounted for, has transfixed a nation brought together by the tragedy.

“So may of us were in the water for four or five hours,” one survivor told Skai TV, saying while she had found salvation in the sea she had also witnessed women and children drowning beside her.

As the magnitude of the tragedy became ever clearer, forensic scientists spoke of the “unprecedented” horror of having to identify bodies burned beyond recognition. Victims include numerous children including a six-month-old baby boy.

Relatives flocking to the morgue where remains have been transferred, were told to provide DNA samples to facilitate the identification process. – Guardian (Additional reporting Reuters)