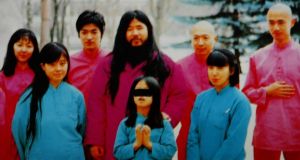 An undated photo shows cult leader Shoko Asahara (centre, back) with his wife Tomoko (left, front) and daughter Archery (centre, front) along with members of his inner group of disciples. Phootograph: EPA/HO

Japan has executed six more members of the doomsday cult Aum Shinrikyo, which carried out the deadly sarin gas attack on the Tokyo subway in 1995.

All 13 members of the cult that were on death row have now been executed, after Chizuo Matsumoto, the cult’s former leader who went by the name Shoko Asahara, and six other members of the group were hanged on July 6th.

The attack killed 13 people and injured at least 5,800 people, some permanently, shattering the nation’s myth of public safety.

The Aum Shinrikyo, or Aum Supreme Truth cult, which mixed Buddhist and Hindu meditation with apocalyptic teachings, staged a series of crimes including simultaneous sarin gas attacks on subway trains during rush hour in March 1995.

Sarin, a nerve gas, was originally developed by the Nazis.

“It was unprecedented level of extreme and serious crimes which must not happen again and terrified not only people in Japan but also foreign countries and shook the society,” Justice Minister Yoko Kamikawa told a news conference. “I ordered executions based on extreme careful consideration.”

Asahara, born Chizuo Matsumoto, was described as a malignant Pied Piper, a half-blind guru who claimed to have supernatural powers, including the ability to float above the ground.

Asahara told his followere he was the reincarnation of Shiva, the Hindu god of destruction and regeneration.

During his trial, prosecutors dismissed claims by Asahara’s family and defence team that he had lost control over his followers. The trial heard details of a plot to use the cult’s helicopters to dump 70 tons of sarin over Tokyo, one of the world’s most crowded cities.

His fate was effectively sealed in January when the supreme court rejected an appeal by Katsuya Takahashi, the last of the cultists to go on trial. That ruling ended more than two decades of legal work to bring about 190 people associated with Aum to justice.

Asahara was on death row for nearly 14 years and ended his life babbling, incontinent and cut off from his family and lawyers. He never publicly explained his actions or offered an apology to the victims.

The cult has splintered into three groups with over 1,600 members in Japan. Police and neighbours constantly monitor the headquarters of the largest splinter group, Aleph, which occupies a building in Tokyo’s western suburbs.

Japan remains one of the few developed countries to maintain the use of capital punishment for murders by hanging. Inmates and family members are only notified of the execution on the day it is carried out. Despite international condemnation, public support for the death penalty remains high in Japan.