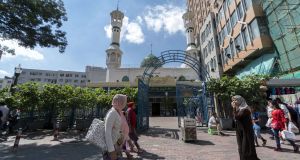 Human rights activists have noted a “staggering” increase in the number of arrests among minorities in Xinjiang as the Chinese government cracks down sharply on separatism in the restive western region.

China says it is bringing economic wellbeing to Xinjiang but critics accuse Beijing of imposing a tough rule of law in the region, which is home to 12 million Muslims, mostly Turkic-speaking Muslim Uighurs, who account for 46 per cent of the population.

There are reports of hundreds of thousands of Uighurs being detained without trial in “re-education camps” in the province. Beijing has implemented a comprehensive surveillance system, with the latest technology including DNA collection, face-recognition camera systems and mobile phone scans.

There is a heavy police presence in the region and the government has also imposed some restrictions on ethnic language, culture, and religion.

Rights activists believe the situation has become tougher as the region, which borders key central Asian states, is critical to the success of President Xi Jinping’s “Belt and Road Initiative”, a project which aims to bring trade and investment along the Silk Road route through Central and South Asia, Europe and the Middle East.

The Global Times newspaper recently reported that 461,000 impoverished people had been relocated to other parts of Xinjiang to find work and local cadres said the move was to improve stability and alleviate poverty.

Some 21 per cent of all arrests in China last year were in Xinjiang, which makes up just 1.5 per cent of the country’s population, according to a joint submission by the NGOs Chinese Human Rights Defenders and the Equal Rights Initiative.

“For both arrests and indictments, the sudden increases in 2017 from 2016 are staggering,” the NGOs said in a joint submission to the UN Committee on the Elimination of Racial Discrimination (CERD).

Indictments in Xinjiang made up about 13 per cent of the total for China.

“Under the pretext of ‘counter-terrorism’, ‘anti-separatism’, and ‘de-extremism’ efforts, Chinese authorities have greatly increased the number of arrests and prosecutions in Xinjiang, which will have disproportionally affected Uyghur Muslims,” they said.

CERD is due to meet in August to discuss China’s implementation of the International Convention on the Elimination of All Forms of Racial Discrimination, which it signed in 1981.

“Most of the poverty-stricken counties in southern Xinjiang suffer from a poor living environment and insufficient infrastructure,” the Xinhua News Agency reported in January. “The area has also been prone to terrorism.”

The NGOs said the rise was most likely down to hard-line tactics implemented by the Communist Party secretary for Xinjiang, Chen Quanguo, who was appointed in August 2016 and has overseen a 92-per cent increase in security spending.

The government plans to transfer 100,000 residents in southern Xinjiang’s Hotan and Kashgar by 2019, to find employment somewhere else, the Global Times reported.

It cited Yu Shaoxiang, an expert on social security and poverty relief from the Chinese Academy of Social Sciences, saying that Xinjiang faced “ethnic issues” which made poverty alleviation more difficult than other areas.