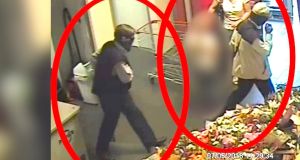 A surveillance camera photo from the State Criminal Police of Lower Saxony shows masked perpetrators, suspected to be RAF members, during a robbery in Hildesheim, Germany, taken on May 7th, 2016. File photograph: Police handout/EPA

Old-age poverty is a reality for millions of Germans who struggle to make ends meet when their working life ends.

But sympathy is in short supply for three German pensioners who have taken to topping up their meagre incomes by robbing supermarkets, money transporters and petrol stations.

Ernst Volker Staub (63), Daniela Klette (59), and Burkhard Garweg (49), belong to the third and last generation of recruits to the organisation that carried out a series of high-profile kidnappings and terrorist attacks in the 1970s and 1980s.

The organisation disbanded 19 years ago and, in a bid to close the RAF file, German police have now published pictures they say show the three during a supermarket hold-up last year.

The blurry pictures show three people holding tissues to their faces as they wave guns, one of at least 10 robberies police have linked to the group, securing a haul of about €1 million.

Other attacks were more spectacular. During a robbery in June 2015 in Bremen, two masked people blocked the path of a money transporter van and threatened personnel with Kalashnikov rifles. A third person appeared on the scene in another car, armed with a rocket launcher.

Though several shots were fired, damaging the transporter’s wheels and shell, the three failed to gain access to the vehicle and the driver sped off. Police say crime scene DNA traces point to the involvement of the trio.

In addition to images from robberies, police have released details from taps of phones of the trio’s families in the hope of turning up additional clues – but with no luck to date.

The RAF was a radical offshoot of 1968 student revolutionaries who demanded answers from their parents about their involvement in the Nazi era and subsequent national amnesia.

With a mix of Marxist-Leninist-Maoist ideology, the so-called Baader-Meinhof gang launched an armed campaign against a West German establishment it accused of rebuilding creeping authoritarian structures similar to the Third Reich.

Bombings, assassinations and kidnappings by the self-described “urban guerrillas” reached their peak in the autumn of 1977.

After founders Andreas Baader, Ulrike Meinhof and others were caught – and eventually took their own lives in prison – a second and third generation continued with their campaign.

The trio sought by police now are believed to have been involved in the 1989 murder of Deutsche Bank chairman Alfred Herrhausen. Nine years later, on April 20th, 1998, the RAF declared in an eight-page letter that the group had dissolved and that the “urban guerrilla in the shape of the RAF is now history”.

The group secured assistance – and possibly new identities – from allies in east Germany, and German police now believe they are living under those names in Spain, Italy or France.