British parliament to get final vote on Brexit deal 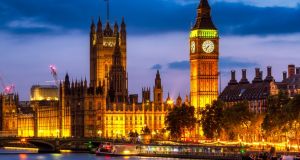 The British parliament will get a vote on the final deal before Britain leaves the European Union, but MPs and peers will not be able to stop Brexit from going ahead.

“I can now confirm that once we’ve reached an agreement we will bring forward a specific piece of primary legislation to implement that agreement,” he told MPs on Monday.

The Bill is expected to cover the contents of the withdrawal agreement, including issues such as an agreement on citizens’ rights, the financial settlement and the details of any transition period agreed between both sides.

Mr Davis said that MPs and peers will be able to scrutinise and amend the Bill and that if they were unhappy with the agreement, he would have to return to Brussels to seek changes.

He made clear, however, that a rejection of the Bill would not stop Britain leaving the EU at the end of March 2019.

Labour’s shadow Brexit secretary Keir Starmer welcomed what he described as “a significant climbdown from a weak government” on the verge of defeat.

“For months, Labour has been calling on ministers to guarantee parliament a final say on the withdrawal agreement. With less than 24 hours before they had to defend their flawed bill to parliament they have finally backed down,” he said.

“However, like everything with this government, the devil will be in the detail. Ministers must now go further. They need to accept Labour’s amendments that would ensure transitional arrangements, and protect jobs and the economy from a cliff edge.”

MPs have tabled more than 400 amendments to the European Union (Withdrawal) Bill, which transposes EU rules into British law and repeals the act which brought Britain into the Common Market in 1973.

Some Conservatives who oppose a hard Brexit have joined forces with opposition MPs to back a number of amendments, but some pro-Brexit Labour MPs are expected to cross the floor in the other direction.

Reporting on the state of the negotiations, Mr Davis said that the future of the Border could only be determined once the shape of Britain’s future relationship with the EU becomes clear. He repeated that Britain would not accept any arrangement which created a new border between Northern Ireland and the rest of the United Kingdom. But he said Britain was also determined to avoid a return to a hard Border on the island of Ireland.

“If the government achieves its primary policy of a tariff-free, barrier-free free trade agreement, then a customs agreement following on from that would be a very light-touch customs agreement. In which case, it would be relatively straightforward to maintain a relatively invisible border. If that is not the case, I expect the alternative would be expensive but not impossible,” Mr Davis said.