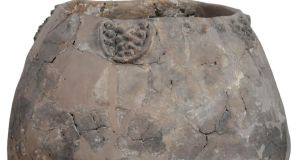 A neolithic jar from Khramis Didi-Gora, Georgia: Pottery fragments from 8,000-year-old jars unearthed near the Georgian capital, Tbilisi, are the earliest evidence of winemaking in the Near East, bringing the tradition back almost 1,000 years earlier than thought. Photograph: HO/AFP/Getty Images

Our ancestors in what is now the Republic of Georgia were quaffing wine 8,000 years ago, scientists have discovered.

New archaeological evidence has pushed back the origins of wine 1,000 years to the Neolithic period, when humans were still using stone tools.

Previously the oldest known traces of wine dated to about 5,000 BC and were recovered from the Zagros mountains of Iran.

Scientists now believe the practice of crushing grapes to produce a heady alcoholic drink started up to 1,000 years earlier in the south Caucasus region between eastern Europe and western Asia.

State-of-the-art methods of chemical extraction revealed tartaric acid, and the organic acids malic, succinic and citric, the researchers reported in the journal Proceedings of the National Academy of Sciences.

Dr Stephen Batiuk, a member of the team from the Department of Near and Middle Eastern Civilisations at the University of Toronto, Canada, said: “We believe this is the oldest example of the domestication of a wild-growing Eurasian grapevine solely for the production of wine.”

The excavated sites contained the remains of two Neolithic villages at Gadachrili Gora and Shulaveris Gora.

The period is characterised by the start of farming and animal domestication, as well as crafts such as pottery and weaving, and the production of polished stone tools.

Dr Batiuk said: “Pottery, which was ideal for processing, serving and storing fermented beverages, was invented in this period together with many advances in art, technology and cuisine.

“In essence, what we are examining is how the Neolithic package of agricultural activity, tool-making and crafts that developed further south in modern Iraq, Syria and Turkey adapted as it was introduced into different regions with different climate and plant life.

“The horticultural potential of the south Caucasus was bound to lead to the domestication of many new and different species, and innovative ‘secondary’ products were bound to emerge.”

For the Neolithic Georgians, the drinking and offering of wine would have permeated nearly every aspect of life from medical practice to special celebrations, Dr Batiuk added.

Wine would also have been drunk during everyday meals, which often featured toasting.

“As a medicine, social lubricant, mind-altering substance, and highly-valued commodity, wine became the focus of religious cults, pharmacopoeias, cuisines, economics, and society throughout the ancient Near East,” said Dr Batiuk.

“The infinite range of flavours and aromas of today’s 8,000-10,000 grape varieties are the end result of the domesticated Eurasian grapevine being transplanted and crossed with wild grapevines elsewhere over and over again.

“The Eurasian grapevine that now accounts for 99.9 per cent of wine made in the world today, has its roots in Caucasia. ”