‘Federal government and European measures have kicked in’, bringing down numbers 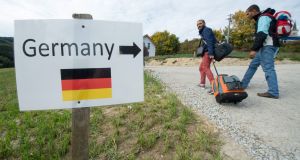 Germany has ascribed a two-thirds drop in asylum numbers last year to successful domestic and European measures agreed during the 2015 refugee crisis.

Provisional data released on Wednesday show that 280,000 people sought asylum in Germany in 2016, down from 890,000 at the height of the refugee crisis in the previous year.

“It has been possible to order and steer the migration issue and limit the numbers coming to us,” said Thomas de Maizière, federal interior minister. “This shows that the federal government and European measures have kicked in.”

About a third of asylum applicants last year were Syrians; 17 per cent were from Afghanistan and 13 per cent from Iraq.

Numbers released by Bavaria’s federal asylum authority said the total number of asylum applications filed last was almost 746,000, though most of this number arrived in 2015. After struggling with the surge in 2015, new staff and streamlined procedures saw the asylum agency reduce the applications backlog by a third and complete almost 700,000 asylum cases in 2016.

The drop in asylum applications gives some breathing space to chancellor Angela Merkel and her ruling Christian Democratic Union (CDU), facing a demands from their Bavarian allies, the CSU, for an upper migration limit.

That demand, motivated by growing public concerns over the refuge crisis security risks, has been rejected by the chancellor as contradictory to Berlin’s asylum commitments under international law.

Ahead of federal elections in the autumn, the CDU has made its own bid to allay public security concerns with far-reaching proposals to centralise police and intelligence structures.

Mr de Maizière said the current system, which decentralised competencies to Germany’s 16 federal states in response to Nazi-era abuses, was no longer fit for purpose in the era of international terrorism.

While regional leaders have bristled at the idea of handing over to Berlin competencies – and, with it, political power – the federal interior minister has refused to let up.

Mr de Maizière has said he is tired of Berlin being scapegoated for investigations errors due to mistakes and communication failures between more than 30 regional police, criminal investigators and intelligence bodies. “If I have to carry the responsibility, then we should at least make this official,” he told weekly newspaper Die Zeit.

Three weeks after the Christmas market attack that killed 12, carried out by a failed asylum seeker from Syria with links to Islamic State, Berlin has promised new measures to reduce the threat posed by such persons in the future.

New proposals would allow the detention of failed asylum seekers considered terrorist threats, even if their deportation is delayed, as well as the increased use of electronic foot-tags.

In addition, countries that refuse to take back their citizens – Tunisia in the case of Christmas market attacker – may face aid cuts or tougher visa rules.