Russian intelligence is alleged to have compromising material on Donald Trump

U.S. President-elect Donald Trump questions whether Russia was responsible for computer hacks of Democratic Party officials, as he heads into a New Year's Party in Florida. 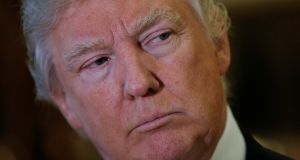 Donald Trump and his inner circle ‘have received a regular flow of intelligence from the Kremlin, a report dated June 2016 alleges. Photograph: Reuters

US president-elect Donald Trump has accused intelligence agencies of allowing “fake news” about an alleged controversial dossier, which references a sex tape, into the public domain.

In a tweet on Wednesday, hours before his first news conference in nearly six months, Mr Trump accused intelligence agencies of taking “one last shot” at him by leaking the information.

“Are we living in Nazi Germany?” he asked. The businessman-turned-politician, due to enter the White House in nine days, and his appointed chief of staff, Reince Priebus, derided as “fake news” a CNN report that classified documents presented to Mr Trump in an intelligence briefing last week included allegations that Russian operatives claim to have compromising information about him.

“Russia has never tried to use leverage over me. I HAVE NOTHING TO DO WITH RUSSIA - NO DEALS, NO LOANS, NO NOTHING!” Trump wrote in one of the Twitter posts.

He also pointed to the Kremlin’s denials of the reports on the dossier that emerged late on Tuesday, writing, “Russia just said the unverified report paid for by political opponents is ‘A COMPLETE AND TOTAL FABRICATION, UTTER NONSENSE.’ Very unfair!”

His comments come after it emerged that the chiefs of America’s intelligence agencies last week presented president Barack Obama and Mr Trump with a summary of unsubstantiated reports that Russia had collected compromising and salacious personal information about Mr Trump, two officials with knowledge of the briefing said.

The summary is based on memos generated by political operatives seeking to derail Mr Trump’s candidacy.

Details of the reports began circulating in the autumn and were widely known among journalists and politicians in Washington.

The two-page summary, first reported by CNN, was presented as an appendix to the intelligence agencies’ report on Russian hacking efforts during the election, the officials said.

Intelligence agencies should never have allowed this fake news to "leak" into the public. One last shot at me.Are we living in Nazi Germany?

Russia has never tried to use leverage over me. I HAVE NOTHING TO DO WITH RUSSIA - NO DEALS, NO LOANS, NO NOTHING!

The material was not corroborated, and The New York Times has not been able to confirm the claims.

But intelligence agencies considered it so potentially explosive that they decided Mr Obama, Mr Trump and congressional leaders needed to be told about it and informed that the agencies were actively investigating it.

Intelligence officials were concerned that the information would leak before they informed Mr Trump of its existence, said the officials, who spoke on the condition of anonymity because they were not authorized to speak about it publicly.

In an appearance recorded for NBC’s “Late Night With Seth Meyers,” Mr Trump’s spokeswoman, Kellyanne Conway, said of the claims in the opposition research memos, “He has said he is not aware of that.”

On Wednesday, a spokesman for president Vladimir Putin of Russia dismissed the allegations. “The Kremlin has no compromising dossier on Trump, such information isn’t consistent with reality and is nothing but an absolute fantasy,” the spokesman, Dmitri Peskov, said at a news conference.

Since the intelligence agencies’ report on Friday that Mr Putin of Russia had ordered the hacking and leaks of Democratic emails in order to hurt his Democratic opponent, Hillary Clinton, and help Mr Trump, the president-elect and his aides have said that Democrats are trying to mar his election victory.

The decision of top intelligence officials to give the president, the president-elect and the so-called “gang of eight - Republican and Democratic leaders of Congress and the intelligence committees - what they know to be unverified, defamatory material was extremely unusual.

The firm was paid for its work first by Mr Trump’s Republican rivals and later by supporters of Mrs. Clinton. The New York Times has checked on a number of the details included in the memos but has been unable to substantiate them.

The memos suggest that for many years, the Russian government of Mr Putin has looked for ways to influence Mr Trump, who has travelled repeatedly to Moscow to investigate real estate deals or to oversee the Miss Universe competition, which he owned for several years.

Mr Trump never completed any major deals in Russia, though he discussed them for years.

The former British intelligence officer who gathered the material about Mr Trump is considered a competent and reliable operative with extensive experience in Russia, American officials said. But he passed on what he heard from Russian informants and others, and what they told him has not yet been vetted by American intelligence.

The memos describe sex videos involving prostitutes with Mr Trump in a 2013 visit to a Moscow hotel. The videos were supposedly prepared as “kompromat,” or compromising material, with the possible goal of blackmailing Mr. Trump in the future.

Michael Cohen, a lawyer and adviser to Mr Trump, also went to Twitter to deny a specific claim in the opposition research involving him.

One of the memos claims that Mr Cohen went to Prague in August or September to meet with Kremlin representatives and to talk about Russian hacking of Democrats.