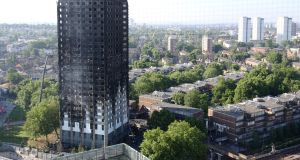 A public inquiry into the Grenfell Tower fire in London that killed at least 80 people in June held its first session on Thursday. Photograph: Rick Findler/PA Wire

The retired judge chairing a public inquiry into the fire at Grenfell Tower, which killed at least 80 people last June, has promised to provide answers about how it could have happened.

Sir Martin Moore-Bick, a former court of appeal judge, was speaking at the formal opening of the inquiry, exactly three months after the fire destroyed the west London tower block.

“We are acutely aware, not only that so many people died or were injured in the fire, but that many of those who survived have been severely affected by their experiences. We are also conscious that many have lost everything and even now are dependent on others for many of their daily needs,” he said.

“The inquiry cannot undo any of that, but it can and will provide answers to the pressing questions of how a disaster of this kind could occur in 21st century London and thereby, I hope, provide a small measure of solace.”

Some survivors accused Sir Martin of insensitivity when he declined to answer questions at the end of his 45-minute statement, walking away as one of their lawyers sought to speak on their behalf. Others complained about the venue for the launch, a ballroom in central London.

Sir Martin said the venue was chosen because it was big enough to accommodate the hundreds of people expected to attend the launch. He said the inquiry was looking for a suitable venue closer to Grenfell for subsequent hearings.

The inquiry will have two phases, with the first focusing on how the fire started and spread, as well as the response of emergency services and the evacuation of residents from Grenfell. The second phase will look at the design and refurbishment of the building, whether it complied with regulations and if those regulations were accurate.

Sir Martin said he had two reasons for structuring the inquiry in this way.

“The first is because there is an urgent need to find out what aspects of the building’s design and construction played a significant role in enabling the disaster to occur. That is important because, if there are similar defects in other high-rise buildings, steps must be taken quickly to ensure that those who live in them are kept safe,” he said.

“The second is because until we understand the chain of events in some detail it will not be possible to pinpoint the critical decisions that had a direct bearing on the exposure of the building to the risk of an uncontrollable fire.”

Sir Martin rejected a request from survivors to be represented among the “assessors” who will be advising him during the inquiry. And he angered some survivors by calling on them to agree among themselves to share legal representation to avoid having numerous lawyers representing people with shared interests in the inquiry.

The retired judge said the inquiry would not seek to apportion blame or to choose who should be rewarded with compensation but he insisted that he would not be inhibited by the possibility of prosecutions in the future.

“I shall therefore not shrink from making any findings or recommendations that are justified by the evidence simply because someone else may at a later date consider that they form the basis of civil or criminal liability. The police are, of course, conducting their own investigation into possible criminal offences,” he said.

Sir Martin is hoping to issue the inquiry’s first report by Easter 2018 and Downing Street said on Thursday that prime minister Theresa May was confident the inquiry would discover what happened at Grenfell and learn any relevant lessons for the future.