US wants broad powers for any UN peacekeepers in Ukraine 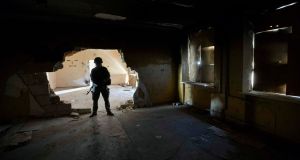 A Ukrainian serviceman stands guard at his position on the front line in the town of Maryinka, east Ukraine, on September 3rd. Photograph: Oleksandr Klymenko/Reuters

The United States has said it would back the deployment of United Nations peacekeepers to eastern Ukraine, as long as they had a broad mandate and access to the Russian border, through which weapons and fighters flow to separatist militia.

Having opposed earlier Ukrainian requests for peacekeepers, Russia distributed a UN draft resolution this month for a mission that would be restricted to the “contact line” separating government and separatist forces and would only be tasked with protecting international monitors operating in the conflict zone.

In response to a suggestion from German chancellor Angela Merkel, Russian president Vladimir Putin said on Monday that the resolution could be amended to allow peacekeepers to go beyond the contact line.

Russia still insists that the peacekeepers would only protect the monitors, however, binding them to an Organisation for Security and Co-operation in Europe operation that is itself restricted in where it can travel.

“I want to be clear that any such peacekeeping force should have a broad mandate for peace and security throughout the occupied territory of Ukraine,” US state department spokeswoman Heather Nauert said on Wednesday.

Any mission must have access “up to and including the border with Russia, in order to avoid deepening or institutionalising the divisions inside Ukraine,” Ms Nauert said, adding that Germany and other European states share that view.

Ukrainian diplomats have also prepared proposals for a peacekeeping mission, to try to end a conflict that has killed 10,000 people and displaced more than 1.5 million since spring 2014.

As well as having full access to separatist-held areas, Ukraine says the peacekeeping mission must not include anyone from “aggressor state” Russia. Kiev also refuses to discuss the issue with Moscow-backed warlords in the east.

Officials in Kiev say Moscow wants to “freeze” the conflict rather then help the east reintegrate with the rest of Ukraine, and they note how Russian peacekeeping missions dating back to the 1990s in breakaway regions of Georgia and Moldova have only solidified separatist rule there.

Prominent senator Aleksei Pushkov said there was no need for peacekeepers on the border between Russia and separatist-held areas of Ukraine because “it is a zone of peace and serenity”.

“At the State Department they don’t understand the function of UN peacekeepers,” he wrote on Twitter.

“It is not one of their tasks to ‘restore the sovereignty of Ukraine’. They are not Nato forces.”