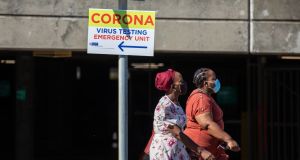 South Africa has closed its land borders until at least mid-February to try to slow the spread of coronavirus, which has spiralled out of control in the country since the start of the new year.

In a television address on Monday evening, President Cyril Ramaphosa told South Africans the country is experiencing a devastating second wave of Covid-19 infections that is far exceeding what was witnessed in 2020.

“The number of new infections, hospital admissions and deaths is higher now than it has ever been since the first case was recorded in our country in March 2020,” he said. “Since New Year’s Day, we have recorded nearly 190,000 new coronavirus infections.”

The leader of the ruling African National Congress party said that more than 4,600 Covid-19-related deaths had been recorded since the start of this year, bringing the official total death toll to 33,579.

The number of Covid-19 cases recorded in the country as of Monday stood at 1,246,643, with Gauteng, KwaZulu-Natal and Western Cape the three provinces worst hit by the disease.

“There are currently over 15,000 people with Covid-19 in hospitals nationally, placing a considerable strain on health facilities, personnel and equipment. Around a third of all Covid-19 patients in hospitals are on oxygen,” Mr Ramaphosa said.

Health workers across the country have been warning that hospitals in the public and private sector have reached breaking point, with patients in some facilities being treated in makeshift emergency tents.

Professor Salim Abdool Karim, chair of the government’s Covid-19 advisory committee, conceded on Tuesday that predictions of the second wave of the virus only surging in January were wrong, as it had started in December.

He told SAFM radio this was because the virus’s spread was facilitated by “super-spreader” events – such as year-end celebrations in early December attended by large groups of teenagers – instead of travellers, as the scientists had expected.

In addition, last August South African scientists discovered a new strain of coronavirus that appears to be more transmissible than earlier variants.

The strain, which has spread to all nine provinces and abroad, is suspected of being a significant contributing factor in the explosion in infections.

Scientists are testing whether any of the approved vaccines will be less effective against the South African coronavirus variant, known as the 501Y.V2 strain. They expect to release their findings within two weeks.

Mr Ramaphosa cited congestion at 20 of the country’s land borders as the reason for their closure, saying the overcrowding was exposing people to infection.

He added the large numbers crossing borders over the festive period had also made it difficult for officials to ensure that health requirements for entry are met.

The government also maintained Level 3 of its five-stage risk-adjusted lockdown strategy, which was reintroduced before Christmas, which means the sale of alcohol is still banned and a 9pm to 5am curfew remains in place.

Bans on public gatherings of more than 50 people will also continue, but the country cannot afford to introduce the work restrictions associated with a hard lockdown.

Mr Ramaphosa’s government has come under fire for its failure to pre-order Covid-19 vaccines for the country’s 60-million population by the first week of 2021, as some other developing countries have done.

The state had set a target of vaccinating 40-million people by the end of 2021, and the president insisted on Monday that this remained the government’s plan despite the paucity of official communication on how it is going.

In reference to the vaccine roll out, Mr Ramaphosa maintained that South Africa had secured more than 20 million doses. But he did not give any details of where they would come from, when they will be delivered or take any questions on the matter.

However, minister for health Zweli Mkhize told MPs last week that the government’s first supply of 1.5 million doses of the AstraZeneca vaccine from the Serum Institute of India would arrive by the end of January. These are primarily for health workers.