Seven dead in collision between helicopter and small plane in Majorca 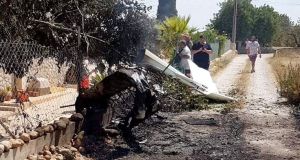 Debris after a plane and a helicopter collided in flight over the village of Inca on Sunday. Photograph: EPA/Incendios F Baleares

Seven people, including two minors, were killed on Sunday in a collision between a helicopter and a light plane on the Spanish island of Majorca, the regional government said.

Five people were on board the helicopter, two of them minors, and they were all likely Germans, the Balearic Islands government said on Twitter. Two adult Spaniards were in the small plane. All the people on board the two aircraft were killed.

The cause of the accident in the municipality of Inca was not yet known. Emergency services were notified of the crash at 1.35pm local time.

“My solidarity and love for the families of the victims that lost their lives in this tragic accident,” Spain’s acting prime minister Pedro Sánchez tweeted.