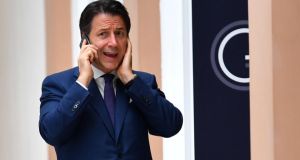 Giuseppe Conte: At the G7 summit in Biarritz on Saturday, he said he did not expect to be prime minister again. Photograph: Dylan Martinez

The name of the next Italian prime minister is the main hurdle in talks between the anti-establishment Five Star Movement (M5S) and the centre-left Democratic party (PD) as they scramble to form a new government by Tuesday and avoid early elections that could put Matteo Salvini at the head of a far-right coalition.

The PD leader, Nicola Zingaretti, has objected to demands from his M5S counterpart, Luigi Di Maio, to reinstate Giuseppe Conte as prime minister. Conte resigned on Tuesday, ending the ill-fated 14-month alliance between M5S and the far-right League.

At the G7 summit in Biarritz on Saturday, Conte said he did not expect to be prime minister again. He also made it clear he would not lead a revived government of M5S and the League.

Italy plunged into chaos earlier this month when Salvini, leader of the League, withdrew his party from the coalition in order to force snap elections.

The power to dissolve parliament and call elections rests with the president, Sergio Mattarella, who on Thursday gave Italy’s main parties until Tuesday to form a solid alternative government.

Zingaretti, who until the middle of last week opposed a pact between the PD and its long-time foe, has laid down some tough conditions, including M5S scrapping a hardline anti-immigration Bill passed with the League and committing to remaining in the EU.

There are vast differences between the two parties but the main impediment is the choice of prime minister. The PD would back Roberto Fico, an M5S member and lower house speaker, according to reports in the Italian media on Sunday.

Fico is among M5S’s left-wing element and has often spoken out against Salvini’s fomentation of anti-immigrant hatred. Zingaretti said on Saturday Italy needed “a breakthrough government”. “We will continue to work to try and open a new political season,” he added. Senior PD members were due to meet in Rome on Sunday afternoon.

The chances of M5S and the League making peace and attempting to govern are remote but after more than two weeks of dramatic twists and turns, the prospect cannot be completely ruled out. A weakened Salvini has made several overtures to M5S, saying on Thursday he would be available to restore the partnership so long as it got things done. Alessandro Di Battista, a prominent M5S member, favours a return to the League.

Salvini’s manoeuvres in recent weeks have cost the League: the party is down to 33.7 per cent from 38.9 per cent in late July, according to a poll by Winpoll published by Il Sole 24 Ore on Sunday. The survey also found that 41 per cent of Italians support new elections. If Mattarella calls elections soon, they would probably take place in October or November. – Guardian News and Media