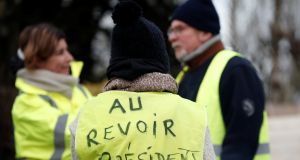 The yellow vests movement started in the middle of November as a protest against a fuel tax but has since grown into a broader backlash against the government. Photograph: Reuters

French companies have this week revealed some €60 million of lost business from anti-government protests rocking the country, which could augur badly for the likes of supermarket chains Casino and Carrefour.

Shares in retailer FNAC Darty fell on Thursday after the electronics goods retailer estimated a revenue hit of some €45 million from the closure of stores during the protests and fewer shoppers.

With no sign of the protests ending, Air France KLM said the unrest had reduced sales by €15 million euros – a relatively small figure for the Franco-Dutch airline but enough to push its shares down too.

The BBC has reported that members of the yellow vests (gilets jaunes) protest movement have vandalised almost 60 per cent of France’s entire speed camera network.

Minister for the interior Christophe Castaner said the wilful damage was a threat to road safety and put lives in danger.

The yellow vests movement – named after the fluorescent jackets all French motorists carry in their vehicles – started in the middle of November as a protest against a fuel tax but has since grown into a broader backlash against the government.

The demonstrations have been marred by violence that has led to shopping districts and tourist hotspots having to close down on some weekends.

“The impact will be felt first and foremost with those companies with a physical presence on the high street, such as FNAC Darty. But others will also be impacted, such as hotels group Accor since the gilets jaunes has been negative for tourism in Paris,” said Meriem Mokdad, fund manager at Roche Brune Asset Management.

Confidence was also down in France’s construction industry as a result of the protests, said HSBC, which said it was revisiting its valuation of Bouygues’ construction related business to better reflect the global environment. – Reuters