100kg coin worth €3.7 million believed to have been melted down shortly after theft 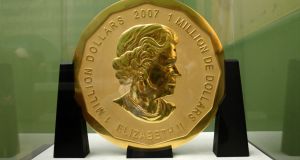 A file photograph, taken in December 2010, of the 100kg gold coin worth €3.7 million stolen from a Berlin museum in March 2017. Photograph: Marcel Mettelsiefen/AFP/Getty Images 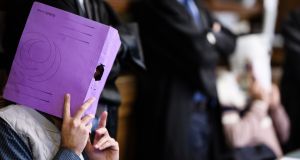 One of the four defendants holds a magazine in front of his face in the courtroom in Berlin on Thursday, at the start of their trial for the theft of a 100kg gold coin froim a museum in 2017. Photograph: Clemens Bilan/EPA 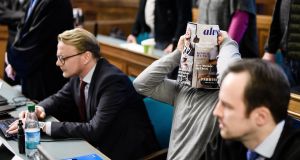 One of the four defendants holds a magazine in front of his face in the courtroom in Berlin on Thursday, at the start of their trial for the theft of a 100kg gold coin froim a museum in 2017. Photograph: Clemens Bilan/EPA

The trial has begun of four men accused of stealing a 100kg gold coin worth €3.7 million from a museum in the German capital nearly two years ago.

Three of the four are members of the Remmo clan, a Lebanese family with criminal links in Berlin, and are aged between 20 and 24; the fourth is a former security guard at the museum.

The spectacular theft took place in the early hours of March 27th, 2017, when thieves climbed a ladder mounted on elevated railway tracks in the middle of the night and entered the Bode Museum through an unlocked staff room.

The coin – a rare Canadian Maple Leaf, 3cm thick and with a diameter of 53cm – was on display in a reinforced case. Thieves smashed the case, heaved the coin on to a wheelbarrow, exited by a window 150m away and raced down the tracks to a nearby train station.

There the thieves appear to have abseiled into an adjacent park and vanished with the coin in a waiting car.

The coin was minted in 2007 with an image of Queen Elizabeth II on the front and maple leaves on the back. It was loaned by a private owners to the museum for the exhibition and is only one of five made by the Canadian Royal Mint. Berlin police believe the coin was damaged in the theft and melted down for its gold shortly after it disappeared.

Days before the theft, museum employees discovered traces of a previous break-in attempt at the window and notified their superiors. The alarm on the window had been defective since 2013.

The four men were arrested by special forces in July 2017 in Berlin’s Neukölln neighbourhood, which is home to a large immigrant population. In addition to the arrests, police seized several vehicles, four shotguns and a six-figure sum of money.

The three clan members going on trial had previous criminal records, according to police. Last year police confiscated property worth €9.3 million owned by the clan and financed in part, investigators believe, with the proceeds of the theft.

In the days after the raid police say the security guard, identified only as Dennis W, bought a gold chain worth €10,000 and was looking at luxury cars. Three weeks before the raid, police caught him stealing car licence plates. In the boot of his car police say they found tools useful for a break-in and a Bode Museum flyer.

Because of their age, the related defendants are being tried in a juvenile court. Germany’s juvenile courts hear cases of accused who were under 21 at the time of the alleged crime.

Experts on Germany’s criminal clans say it is likely the men will remain silent during the case, accepting jail time if sentenced as a matter of family honour. The case comes as German authorities crack down on multi-generational criminal families with Arab roots.

Khaled Miri, a member of another Berlin clan, told local broadcaster RBB the Bode Museum theft was still the talk of the capital’s clans.

“Who doesn’t dream of having such a coin and turning it into cash?” he said. “With it you can secure your children’s future, and their children, too, if you’re lucky.”