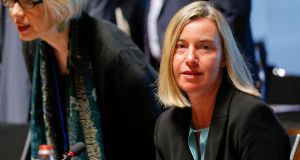 EU foreign policy chief Federica Mogherini: ‘I think we need to remind ourselves about the important steps that have been taken in the western Balkans.’ Photograph: Julien Warnand/EPA

North Macedonia and Albania are likely to face disappointment on Tuesday when EU members decide whether they are ready for accession talks, despite top Brussels officials giving strong support to the Balkan states.

The European Commission says the candidates have implemented the reforms required to launch membership negotiations, but France and the Netherlands are expected to lead opposition to such a move in the EU foreign affairs council.

Anti-immigration feeling is significant in both EU countries, while Paris wants the bloc to undergo reform before expanding further and the Dutch government is particularly concerned about organised crime and corruption in Albania.

Germany is also reluctant to start membership talks now and is thought to favour postponing the decision, probably until September, despite warnings over what a delay could do to EU credibility in the Balkans.

At the start of the foreign affairs council on Monday, EU foreign policy chief Federica Mogherini noted that it was one year since North Macedonia signed a historic deal with Greece to change its name, ending a 27-year dispute between the neighbours in defiance of nationalist opponents in both countries.

“I think we need to remind ourselves about the power of leadership and courage and the important steps that have been taken in the western Balkans,” she said.

“I hope that member states will remember this and acknowledge these steps ... with important decisions to be taken on opening negotiations for accession both for Albania and North Macedonia, [which] I hope and believe should be done as soon as possible.”

EU enlargement commissioner Johannes Hahn said “we are still negotiating” on the issue but urged member states to send “a clear signal to the whole region”.

“If there should be a relaunch of negotiations, for instance, between Serbia and Kosovo, they need to see that a kind of investment in finding a political compromise is awarded, otherwise they don’t have any incentives,” he added.

“My proposal was always that whenever a country delivers, we should also deliver.”

North Macedonia is now seen as being more ready for accession negotiations than Albania, where progress made with judicial reform has been somewhat overshadowed by a rumbling political crisis and anti-government protests.

Mr Hahn appeared to have North Macedonia in mind when he said “one country has tremendously invested into their European perspective, the leadership has shown courage ... and if this is not awarded we lose not only our accountability but our credibility and finally our leverage.”

“So everything we have invested successfully in the last couple of years is at risk if we are not committed to our own promises,” he added.

As the EU seeks to counter Russian, Chinese, Turkish and Gulf influence across the Balkans, Mr Hahn urged “everybody to understand the regional situation in its entire perspective”.