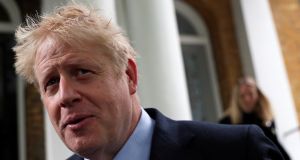 Boris Johnson: Said he would not attend the hustings with political journalists on Monday because he is “too busy” preparing for a BBC leadership debate on Tuesday. Photograph: Hannah Mckay/Reuters

Boris Johnson’s bid to become the new leader of the Conservative party and Britain’s next prime minister received another major boost on Sunday night when he won the backing of Matt Hancock, a former leadership contender and prominent Europhile.

The endorsement for the clear frontrunner to replace Theresa May came despite Mr Johnson’s refusal to attend the first Tory leadership candidates’ TV debate on Sunday night, which featured the five other contenders.

Tory MPs vote for the second time on Tuesday to whittle down the number of candidates to two by Thursday, after which the party’s 160,000 members will select the winner through a postal ballot.

Mr Hancock’s decision to back Mr Johnson is a serious setback for Michael Gove, the Eurosceptic leadership contender who tried to woo Remainers by arguing against the dangers of a no-deal exit.

Mr Gove told the BBC on Monday that Mr Hancock’s decision to back the frontrunner in the leadership contest was “disappointing”, adding: “He was alternating between supporting Boris Johnson and me, who he saw as the two strongest candidates in the race.”

The environment secretary, who insisted he could still win the race for 10 Downing Street, said it was vital that Mr Johnson was “tested” in the contest.

Mr Gove was among the five candidates who attended a hustings with political journalists at Westminster on Monday morning; Mr Johnson indicated he would not attend because he is “too busy” preparing for a BBC leadership debate on Tuesday.

Writing in The Times, Mr Hancock, the health secretary, said: “I’m backing Boris Johnson as the best candidate to unite the Conservative party, so we can deliver Brexit and then unite the country behind an open, ambitious, forward-looking agenda, delivered with the energy that gets stuff done.”

Brushing aside his previous criticisms of Mr Johnson’s attitude to business, he added: “I have been reassured, again emphatically, that a Boris administration will be pro-business, pro-enterprise, supportive of the aspirational and the international. That matters to me, and I’ll hold him to that too.”

Mr Hancock last month lambasted the Eurosceptic Mr Johnson for his supposedly anti-business stance but on Sunday he said he hoped to form a “pro-business partnership” with the Tory leadership frontrunner.

His endorsement will be seen as an attempt by Mr Hancock, a former Bank of England economist and protégé of former chancellor George Osborne, to secure the top job at the treasury in a Johnson government.

Mr Hancock dropped out of the race last week, having fought a campaign based on a strongly pro-enterprise agenda and having warned that Mr Johnson would never secure parliamentary backing for a no-deal Brexit.

In an interview with the Financial Times last month, the former Remain campaigner referred to an infamous remark by Mr Johnson: “To the people who say ‘fuck business’, I say fuck ‘fuck business’.”

The rapprochement will be seen as a sign of old Tory divisions being healed – Mr Hancock and Mr Johnson were fierce adversaries on Brexit – but the health secretary will face fierce competition to become the next chancellor. – Copyright The Financial Times Limited 2019