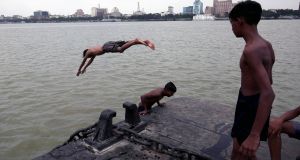 Boys jump into the Ganges river to cool off during hot weather in Kolkata, India, on June 11th. Photograph: Piyal Adhikary/EPA

Weekend showers provided a much-needed but partial respite to parts of India sweltering in a brutal heatwave.

In Bihar, however, one of the poorest areas of the country, 49 people died on Saturday in just 24 hours.

With temperatures in Bihar hovering consistently at about 45 degrees, hospitals were inundated with people suffering from heatstroke. The death toll has since risen to at least 60 and, with many heatstroke victims still in hospital, is expected to rise further. Schools in Bihar will remain closed until Wednesday.

In Tamil Nadu in the south, people have been advised to stay indoors between 11am and 4pm. Earlier this month, four elderly passengers on board the Kerala Express train died of suffocation.

The heatwave, one of the longest on record, has been scorching large parts of north and central India with temperatures of more than 40 degrees. June is always a difficult month in northern India because the heat builds up inexorably as a prelude to the monsoon, which normally arrives at the end of the month.

This is when air conditioners almost cease to be effective and even normally frisky street dogs lie absolutely prone on the pavement all day.

But this year the temperatures have been unusually high even for June, touching 48 degrees near the airport in the Indian capital last week – the hottest June day in the city on record – and above 50 degrees in Rajasthan.

Tens of thousands of people in drought-affected villages in north India have left their homes because they don’t have any drinking water either for themselves or for their cattle.

Even in the state of Jammu & Kashmir in the Himalayas, where many Indians go to escape from the summer heat, the temperature has reached 39 degrees.

The rush to the higher ground resulted in huge traffic jams at the weekend that snaked around the mountains. People had to sleep in their cars because towns like Shimla and Nainital – known as hill stations from the days of the British Raj – had no spare hotel rooms.

“It was unbelievable. The hills were alive and heaving with cars and SUVs and a journey that should take one hour took five,” said Sumith Verma, a Nainital resident.

But Sunday brought light showers to New Delhi and the temperature dipped to about 36 degrees. The skies remained overcast on Monday. Other parts of north and western India – Rajasthan, Gujarat, Punjab and Maharashtra – also had some rain over the weekend.

By now the monsoon should have reached parts of central India but is lagging behind schedule. So far, the monsoon has hit only Karnataka and Kerala in the south. – Guardian