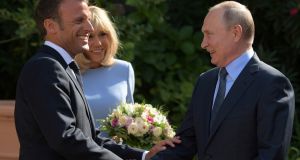 For the Baltic states and former Warsaw Pact countries, Putin is a former KGB interrogator and the Russian Federation is the successor state to the Soviet Union, which annexed or subjugated them. West European states are hard-wired to think of Russia as a military threat.

Russia invaded Georgia in 2008 and Crimea in 2014, with impunity. Putin does not respect European values of civil liberties and human rights in his own country, and stands accused of meddling in US, British and French domestic politics.

Russia is also accused of lying about the downing of Malaysia Airlines flight 17 by Russian-backed Ukrainian militiamen. Two British citizens died when Russian agents poisoned the double agent Sergei Skripal and his daughter.

Yet Russia is part and parcel of Macron’s vision for European security. “I believe we must build a new architecture of confidence and security in Europe, because the European continent will never be stable, will never be safe, if we do not pacify and clarify our relations with Russia,” Macron said in an address to French ambassadors on August 27th.

To prevent Chinese and US superpowers ruling the world, Macron advocates the construction of an alternative pole, comprising the EU and Russia, bolstered by co-development with Africa, and with an Indian foothold in Asia.

Former Latvian president Vaira Vike-Freiberga spoke bitterly of the French sale of aircraft carriers to Russia in 2011. “Their only conceivable purpose was to invade three little Baltic countries,” Vike-Freiberga told a conference at the French Senate. The sale was cancelled after Russia’s annexation of Crimea.

Despite historic lows, including invasion by Napoleon, France and Russia share an exceptionally close history. “French was the language of the Russian court. Tolstoy wrote whole chapters of War and Peace in Russian. France believed it needed Russia to contain Germany, ” says Laure Mandeville, author of The Russian Reconquest.

“The 1789 French revolution inspired the 1917 Bolshevik revolution, which in turn inspired the French left throughout the 20th century,” Mandeville continues. “Gen Charles de Gaulle went to Moscow in 1944. Though he was profoundly anti-Communist, de Gaulle said Franco-Russian relations transcended ideology.

“Today, when Macron says we need Russia at a time when the US is turning away from us, he is following in de Gaulle’s footsteps,” Mandeville says. “Russia is viewed positively by parties across the French political spectrum.”