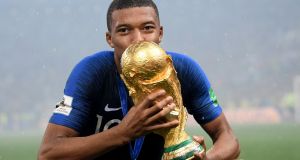 Player of the tournament?

Emmet Malone - N’Golo Kante and Luka Modric have to be among the contenders but for me it was Kylian Mbappé. The 19-year-old took a little while to make his presence completely known but there were hints of what he might do against Peru and then moments of magic against Argentina and Belgium. It’s been a thrill to see him in action.

Keith Duggan - Luka Modric. Croatia’s nerveless ascent will give hope to smaller countries but it wouldn’t have happened without the guile and influence of the 32-year-old. Ridiculously slight and often surrounded by physically imposing midfield opponents, Modric recovered from the missed penalty against Denmark to score in the shootout and was the key influencer of Croatia’s historic run. Harry Kane’s three MOTM awards were for Tunisia, Panama and Columbia. Modric’s three were for Nigeria, Argentina and Russia.

EM - Probably the first one I saw between Spain and Portugal. It was some way to kick off a World Cup and though everyone knew it had potential, it was a tremendous contest with some great goals, an outstanding individual performance by Ronaldo and enough from Spain collectively to suggest they could go a long way in the tournament which, of course, they didn’t. Honourable mentions go to Brazil against Belgium and France against Argentina

KE - Argentina 2-1 Nigeria. Objectively it was not a great match, but with a brilliant Messi goal helping a basket-case Argentina to lurch into the next round covered in blood and tears, with Maradona in hysterics in the stands, it was World Cup football at its best.

KD - The opening Friday night meeting of Spain and Portugal (3-3) set the tone for the tournament; Switzerland-Serbia (2-1) was riveting; France-Argentina (4-3) had everything but for pure adrenaline and shock-novelty value, Japan-Belgium (3-2) and the insane 94th-minute winner by Nacer Chadli gets the vote.

EM - Belgium’s in the dying moments against Japan. Their pace of passing and movement was terrific with De Bruyne picking up the ball from Courtois then taking off. Most teams would have hoofed it but he runs 50 yards then played a perfect ball for Vertonghen. Lukaku steps over the low cross and Nacer Chadli sidefoots home. Remarkable.

KD - Russia 2018 was a prolonged nightmare for Argentina and Lionel Messi but he offered one glimpse of the celestial with his goal against Nigeria. The timing of the run; the two-touch control against his thigh and boot and the inevitable cleanness of the finish. It was the one opportunity he had to break free and he made the most of it.

EM - The Germans going out, I suppose. It became clear that there were some problems in the camp but given the talent and the other teams in that group, they clearly should have got further than they did. As it was, seeing them lose to South Korea was, in its way, another tournament highlight for me.

KE - Croatia getting to the final.

KD - It was quickly forgotten how close Russia came to making it to the semi-finals - where they wouldn’t have been particularly intimidated by playing England. For a team ranked 70th and dismissed even by their own supporters, their performances were remarkable and helped to fire local enthusiasm for the tournament.

EM - Germany, Spain, Brazil, including Neymar all seemed to let themselves down in one way or another. I only saw the Brazilians in the flesh once, against Belgium, and it was actually a cracking game. I wasn’t hugely sorry to see the team go out but the fans were missed. The South Americans were great. Europeans seemed far more wary of coming to Russia and the tournament suffered as a result.

KE - Tempting to say Spain, but in a way it was more disappointing that Edinson Cavani got injured just after scoring his second against Portugal. Losing him ruined Uruguay’s chances against France and was terrible luck for a small country.

KD - Germany. There was something disconcerting about seeing the Reliables of the World Cup malfunction so dramatically. Maybe cruising through qualifications can be a curse. A first elimination from the group stages since 1938; a 1-0 loss to Mexico; 2-0 to South Korea; they were reduced to a shambles by their last few minutes. Their implosion hasn’t been adequately explained yet.

Team of the tournament?

EM - I thought it generally worked well, to be honest. There were glitches, and I disagreed with the penalty decision it was used to make in the final, which would impact more on my thinking if I didn’t believe France would have won anyway. But, intent is one of those issues that is not entirely black and while and I think overall it corrected more wrong decisions than the other way around. There are clearly still issues, and there are clearly still mistakes being made, but this was a start worth making and its implementation will improve over time.

KE - Yes. It didn’t waste much time and was far less controversial than some of the mistakes it corrected would have been if left uncorrected. Without VAR, South Korea’s late first goal against Germany would have been ruled offside, and with so much injury time to play Germany might well have scored and ended up topping that group instead of being eliminated in last place. But, as the penalty decision in the final showed, referees will always make mistakes even when they have the benefit of replays.

KD - It wasn’t perfect and for the first week, it threatened to overshadow the tournament - VAR was practically the man of the match for Portugal-Iran. The instances in which it was applied seemed random at times. It did clarify key moments in passages of play when it was used and it is going to take a long time to settle into a game where the discretion of the referee is woven into the game.

EM - Sunshine and vodka shots while watching a game with people from other countries I had just met on a down day in Sochi. For just a little while there I got a reminder of how the fans experience these things.

KE - Too many to mention.

KD - Coming out of Lenin’s mausoleum after standing in line early one morning for two hours only to hear a Scottish lad, part of an amicable and deeply hungover group that had just landed in Moscow, exclaim, in amazement: “That wasn’t Stalin.”

EM - Sharing a hotel room with 50 mosquitoes in St Petersburg.

KE - Being woken up many mornings at 4.0am by what appeared to be the midday sun blazing through the window. Russians should either adjust their timezones or put up curtains.

KD - Don’t have a bad memory of the place. But it would be interesting to return to the same cities in normal time to see how the atmosphere compares to the few weeks of the World Cup.