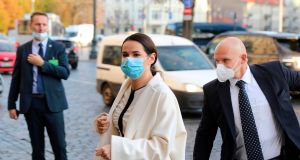 France has called for European mediation and dialogue with Russia to resolve the political crisis in Belarus, even as Moscow again accused western powers of fomenting the unrest.

French president Emmanuel Macron met Belarusian opposition leader Svetlana Tikhanovskaya in Lithuania on Tuesday, for her most high-profile talks since she fled her homeland due to threats after last month’s presidential election.

Autocratic Belarusian leader Alexander Lukashenko claimed to have won the ballot with an implausible 80 per cent of votes, sparking the biggest protests of his 26-year rule and then a brutal police crackdown on peaceful protesters, in which at least three people have died, hundreds have been hurt and more than 12,000 detained.

The EU and United States say the vote was a sham, but Mr Lukashenko has been strongly backed by traditional ally Russia, which has promised him financial and security support while accusing the West of trying to oust him.

“We do not recognise the election of Lukashenko and so we don’t recognise his status as president ... Now we need to be pragmatic and to support the Belarusian people and we will do that,” Mr Macron said after meeting Ms Tikhanovskaya.

“We will do our best as Europeans to help mediate ... Our objective is for this mediation to begin in the next few days or weeks,” he added.

“The aim is a peaceful transition, the release of people who are in prison for their political opinions and the holding of free elections under international observation.”

Mr Macron called for EU sanctions against the Belarusian regime – which could be approved at a summit of EU leaders this week – and dialogue with Russia “because we will not be able to achieve results here without the participation of President [Vladimir] Putin at this stage”.

Ms Tikhanovskaya warmly welcomed Mr Macron’s pledge to seek a peaceful solution to the crisis and to “do everything just to help to release all the political prisoners” in Belarus.

“I think he will speak with the Russian side about Belarus and will do everything possible to involve Russia in these negotiations,” she added.

As Britain and Canada announced their own sanctions on Mr Lukashenko and several of his senior officials, however, Russia reiterated that it sees such measures – and the EU and US refusal to recognise the Belarusian elections – as interference in the country’s affairs.

Mr Putin said in Moscow that Belarus now faced “unprecedented external pressure” and declared: “I would like to repeat: relations between Russia and Belarus are not affected by time or circumstance.”

Russian foreign intelligence chief Sergei Naryshkin said the US was “using the most unscrupulous methods to sway the situation in Belarus” and training “fighters for a new Belarus” in Poland, Georgia, Ukraine and the Baltic states.

1 Aldi, Lidl bow to pressure to ban non-essential ‘middle aisle’ sales
2 Young homeless mother may have been dead in tent for a number of days
3 The real Contagion virus is out there and it’s causing virologists to worry
4 Europe enforces restrictions to avoid ‘millions’ of deaths
5 Cork shootings: Gardaí believe older son was shot multiple times
Real news has value SUBSCRIBE