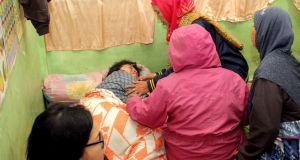 A survivor surrounded by family members after she was rescued when a boat overturned on Lake Toba. Photograph: Lazuardy Fahmi/AFP/Getty Images

An estimated 18 people were rescued and one was confirmed dead from among about 80 passengers aboard a ferry that sank on Monday in Lake Toba in Indonesia’s North Sumatra province, a disaster agency official said.

The Sinar Bangun ferry sank in rough weather at about 5.30pm about a mile from the port of Tigaras, carrying passengers from the lake’s Samosir Island, disaster mitigation agency spokesman Sutopo Purwo Nugroho said.

Mr Nugroho added that search and rescue efforts involving two other ferries and one wooden boat had been hampered by weather conditions in the area on Monday night.

It was not immediately clear if any of the missing passengers were foreigners.

Ferry accidents are common in Indonesia, a vast archipelago, especially during the Islamic holiday of Eid when millions make the annual journey by land, sea and air to their hometowns after the holy fasting month of Ramadan.

Lake Toba, a popular tourist destination promoted by the government, fills the caldera of a giant dormant volcano and is the largest lake in Indonesia and one of the deepest in the world. – Reuters