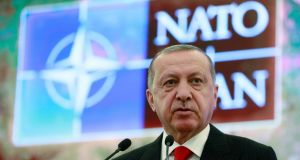 Turkish president Recep Tayyip Erdogan: ‘The legitimate rights of Turkey and the Northern Cypriot Turks over energy resources in the eastern Mediterranean are not open to argument. Our country is determined to defend its rights and those of Cypriot Turks.’ Photograph: Murat Cetinmuhurdar/Presidential Press Office/Handout/Reuters

The publication by the Institute of International and European Affairs of a new analysis of Irish neutrality by Prof Patrick Keatinge is timely. It comes just as fellow EU member Cyprus looks to its partners for solidarity – at this stage just political – over the illegal incursion by Turkish drilling ships into its Aegean territorial waters or Exclusive Economic Zone (EEZ).

The move, which has been condemned by Turkey’s key Nato ally, the US, is in danger of provoking a major regional spat, with Egypt also warning Turkey off as it tries to protect a field off its coast of potentially large hydrocarbon finds, which it hopes to share with neighbours Israel and Cyprus.

In January, seven Mediterranean countries, including Egypt, formed the Eastern Mediterranean Gas Forum, allowing for the creation of a regional gas market. Forum members invited other countries to join. Turkey apparently accepted the invitation but that hasn’t stopped conflicts.

That verbal support was forthcoming from Taoiseach Leo Varadkar at the Sibiu EU summit last week, although Ireland was not one of the four states which backed Nicosia’s call for sanctions against Ankara. And, as Keatinge points out, there are strict limits to how far Ireland would go in defending a fellow member state which comes under attack.

Whether that should be is another matter, but, as he points out in his dispassionate style, the changed political and strategic landscape that Ireland finds itself in warrants at least a re-examination of the ill-defined sacred cow of neutrality.

The test-drilling vessel Fatih, 40km off the coast of Paphos in western Cyprus, will be joined in the next few days by another Turkish drilling ship, the Yavuz. No one has started test-drilling for gas yet. But Turkish intentions are clear, no matter what the law may say. No matter what ostensible allies like the “deeply concerned” US or regional rivals may feel.

We are not here talking about de-escalation.

On Monday, as Turkey launched its annual Sea Wolf naval exercise in the eastern Mediterranean – 131 warships, 57 warplanes and 33 helicopters – Greek defence officials reported two violations of Greek airspace by Turkish F-16s over its islands of Chios and Oinousses.

Ankara’s response to Sibiu’s unanimous denunciation of its violation of Cyprus’s EEZ has been a classic case of two fingers, president Recep Tayyip Erdogan’s bravado and sabre-rattling.

Erdogan was unapologetic at a Nato meeting in Ankara. As the jets took off, he said he expected Nato to support Turkey’s rights in the Mediterranean.

“The legitimate rights of Turkey and the Northern Cypriot Turks over energy resources in the eastern Mediterranean are not open to argument. Our country is determined to defend its rights and those of Cypriot Turks,” he said.

“We expect Nato to respect Turkey’s rights in this process and support us in preventing tensions.”

Nato will do its best not to get involved in this confrontation involving its wayward member Turkey, its leaders relieved that at least Cyprus is not a member. So it does not have to take sides. As for “preventing tensions”, that’s a bit rich.

Turkey does not recognise Cyprus’s EEZ agreements on maritime boundaries with its neighbours because it does not accept the island’s right to dispose of and exploit the territorial waters off the Turkish enclave of Northern Cyprus, the republic established for the Turkish Cypriot minority and Turkish settlers after its invasion in 1974 and which is only recognised by Ankara.

Any agreement on drilling rights is thus unlikely ahead of the successful resumption of talks on the stalled UN-led peace talks.

Five rounds of talks over four decades have seen the sides unable to agree to reunify Cyprus according to the generally agreed destination of a “bizonal, bicommunal federation”, leaving what one writer has called “a glacial, incomplete normalisation of the de facto partition”. The whole of Cyprus is part of the EU, but the Greek Cypriot government’s writ does not run in the north.

The latest row over the Fatih is, however, a useful political distraction and piece of nationalist flagwaving for Erdogan, whose recent defeat in the elections in the city of Istanbul has severely dented his reputation domestically. With negotiations on Turkish accession to the EU largely on hold, and Brussels unwilling to jeopardise its agreement with Turkey on hosting refugees from Syria, he will not be worried about finger-wagging from the EU.

But with important issues of principle, sovereignty, and political face at stake, the danger of an escalation of the war of words into a military conflict remains real.